St Augustine Florida is the oldest permanent European settlement in the Continental United States, the city oozes history. Founded in 1565, St Augustine is a history lovers paradise. It seems everywhere you turn there is something old. I’m not talking about your grandmother old, I’m talking really, really old, as in the oldest wooden schoolhouse showing up on the 1716 tax records.

St Augustine is a walking town. You can easily walk around and see all the historic sites. The city also has two trolley companies that offer hop on, hop off service so you can get off, look around and catch the next trolley.

Where To Stay in St Augustine

If you are going to take advantage of all the great things to see and do in St Augustine, then you need to stay somewhere either close to or in the historic district. There are a lot of options from B&B’s to boutique hotels. The Collector Inn is a boutique hotel consisting of several historic buildings located on a historic site. Of course, there are a lot of other great options as well.

Check out Tripadvisor Reviews for Hotels in St Augustine

There are hundreds of historic markers and buildings located around St Augustine, so it would take quite a long time to list everything but here is a list of some of the better ones to take a look at.

The easiest historic site to list is the one takes center stage. Located prominently on the shores of Matanzas Bay, Castillo de San Marcos is the oldest masonry fort in the continental United States. Construction began in 1672 after an attack on the city by an English privateer destroyed the wooden fort. Over the years the fort has been occupied by the Spanish, British, US Army and the Confederate Army and used as a military prison. The prison was used to incarcerate various native American tribes including Chief Osceola of the Seminole, Geronimo’s Chiricahua Apache tribe and tribes from the Southern Cheyenne.  In 1924 the fort was named a National Monument and in 1933 was turned over to the National Park Service.

Built as a Spanish fort in 1742 to guard the river inlet, Fort Matanzas is much smaller than Castillo de San Marcos but was just as important. The fort was basically a heavily fortified artillery outpost.  Containing 5 cannon the fort was manned by 1 officer and 6 soldiers.  Used to guard the approach to St Augustine, the cannon of Fort Matanzas were deployed against a British fleet as the fort was nearing construction, thwarting an attack on the city. The fort is under the control of the National Park Service and is located about 15 miles south of the historic district on the A1A highway.

Built in 1723, the Gonzalez -Alvarez House is the oldest surviving home in St Augustine. In 1727 the home was occupied by Tomas Gonzalez y Hernandez a Spanish artilleryman stationed at Castillo de San Marcos. In 1715 a British Sergeant major bought the home and doubled the size of the house. In 1786 another Spaniard, Geronimo Alvarez purchased the home and added a second story along with other additions. The home is a National Historic landmark and is open to the public for tours.

Administered by the Department of Veterans Affairs and listed on the National Register of Historic Places, the St Augustine National Cemetery is located adjacent to St Francis Barracks. The first burial took place in 1823 with early burials for veterans of the Seminole Indian Wars. The Dade Monument consisting of 3 pyramid structures made of coquina hold the remains of 1,468 soldiers and there are also graves of 5 soldiers from the British Commonwealth from WW2 interred there as well.

Constructed in 1749, the Avero House was the family home until 1804. The Greek Orthodox Archdiocese purchased the building in 1966 and restored the home. Today it is the site of the St. Photios Greek Orthodox National Shrine, dedicated to the early Greek settlers. The museum inside holds artifacts and tells the story of Greeks who came to the area in 1768.

The Prince Murat House is one of nine historic homes that make up the boutique hotel Collector Inn. Built sometime around 1790 the house was occupied for a time in 1824 by Charles Louis Napoleon Achille Murat , the second Prince Murat and the nephew of Napoleon Bonaparte. After his father was deposed and executed, he immigrated to Austria and then St Augustine Florida were he stayed for some time before buying land in other parts of Florida. The grounds of the Collector Inn also hold other historic homes as well as plaques denoting the location of the Rosario Line and the site where Lincoln’s Emancipation Proclamation were read to the population of St Augustine.

Not anywhere near as old but just as historic is present day Flagler College. Flagler College started life as the Ponce de Leon Hotel in 1887. Henry Flagler, who was co-founder of standard oil and a huge property developer in St Augustine set out to build the finest hotel of the time. Constructed entirely of poured concrete, it was one of the first buildings in the United States to be wired for electricity. The DC generators were installed by Flagler’s friend Thomas Edison. The largest collection of Tiffany stained glass windows in the world were installed in the hotel’s dining room, a total of 79, which now serves as the student dining room for the college. Guests of the hotel included President Grover Cleveland, President Theodore Roosevelt, Mark Twain and baseball great Babe Ruth.

Located across the street from Flagler College is the Lightner Museum which also started life as a hotel built by Henry Flagler. After the Ponce de Leon hotel became an instant success, Flagler began construction of the Hotel Alcazar and opened it within two years. The hotel had a steam room, sulfur baths, a 3 story ball room and the world’s largest indoor swimming pool. The hotel closed in 1932 and in 1947 was purchased by Chicago publisher Otto C. Lightner to hold his extensive collection of art and other collectibles. Lightner turned the museum over to the city of St Augustine in 1948 to be open to the public. The former indoor pool now houses the Café Alcazar.

The mystical Fountain of Youth. Located next to the marshy banks of the Matanzas River the Fountain of Youth Archeological Park offers visitors a chance to learn about early St Augustine history.  With one drink you can erase years and regain your youth. Well not really but the do have a spring where you can give it a try. More important is the springs are located in a park where Pedro Menendez Aviles founded the city of St Augustine in what was the Timucua Village of Seloy in 1565. In 1934 the Smithsonian conducted archeological digs discovering a large number of Christianized Timucua burials which pointed to the park as the first Christian Mission in the United States. In 1909 the owner of the park, Luella Day McConnell, began selling postcards of the spring on the property telling people it was the site of Ponce de Leon’s famous Fountain of Youth. While she may have been one of the worlds best marketers or just plain con artist, she did turn the park into one of Florida’s biggest tourist attractions.

Built in 1750 for the Royal Spanish Treasurer, Juan Estevan de Peña it was later the home of two British Governors. Later it was purchased by Dr. Seth Peck who added a second story in 1837. His grand daughter left the home to the city of St Augustine in 1931.Today the Pena Peck House is managed by the Women’s Exchange and houses artifacts and antiques along with a gift shop.

Built in 1883 as a winter residence for Franklin Webster Smith. Impressed by the Alhambra Palace in Spain, Smith built the house in a Moorish style. After 20 years the house was leased out an became the Zorayda Club where the rich and famous came to dine and dance. In 1913 Abraham Mussallem, an immigrant from Lebanon bought the property and in the 1920’s turned it into a casino and speakeasy. Later in the 1920’s he closed the club and lived in the home with his family until 1933 when he turned it into a museum. The Villa Zorayda is still maintained by the Mussallem family descendants and offers a glimpse into the gilded era.

Take a stroll down Aviles Street, the oldest street in the United States. Archeologists have discovered artifacts under several layers of paving dating to the 1600’s. In the 1930’s the street was home to St Augustine’s art district. Still a vibrant art district the street also houses several historic sites.

The truth is, there are a lot of historic buildings and sites in St Augustine and you can only see so many in a couple of days. After all there are great beaches, interesting people with great stories and other attractions as well. But if you have the time you can see all the ones listed and maybe have time left to check out:

As I said, St Augustine is a walking city and by walking you will come across historic signs everywhere. Of course, it is easy to use the trolley to get around and pick up a couple of brochures that will give you a map and show where everything is. 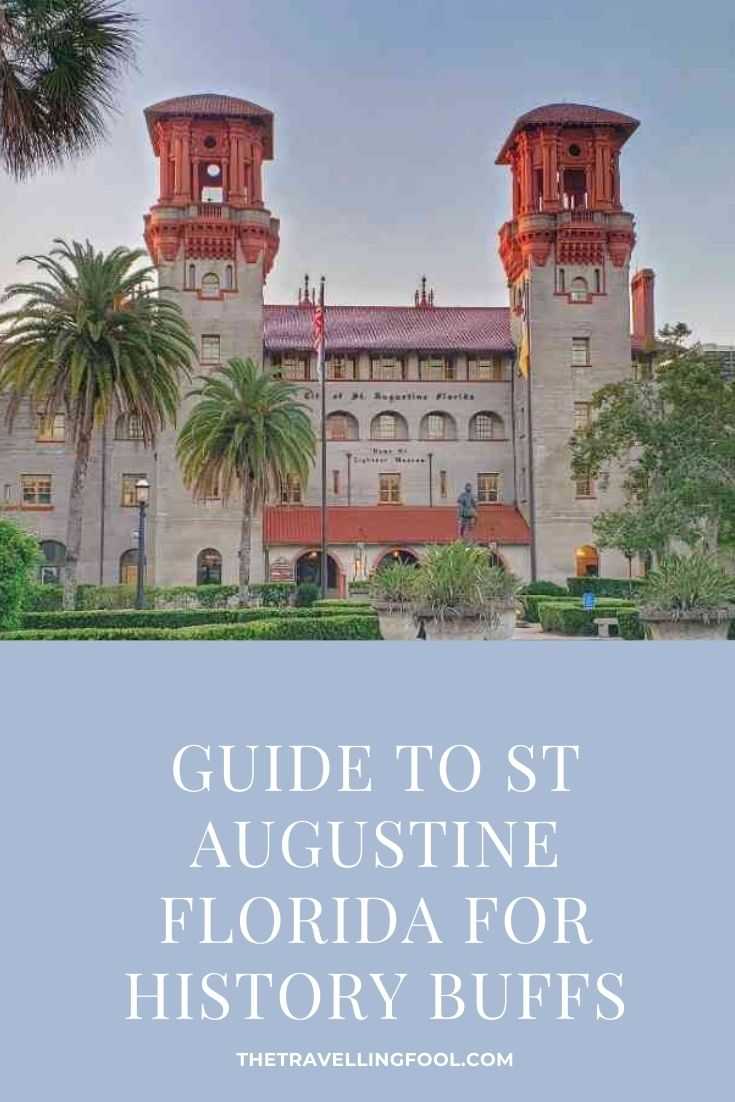