Full disclosure, I was given complimentary accommodations while attending a travel writers retreat in Playa Del Carmen Mexico. The opinions however are all mine

The Mayan civilization originated around 2600 B.C. and were a dominate power in the areas of what is today the Yucatan Peninsula, Guatemala, Belize, El Salvador and Honduras before starting to decline 3000 years later.

Although not the dominate nation it once was, there are numerous examples of how powerful they were in the Mayan ruins that exist today. The Mayan people still live in their ancestral lands and the Mayan culture has influenced much of the present day area. That includes the food and cooking.

The Mayans had an agricultural society and were also expert hunters and fishermen. Maize, beans, squash, chili peppers, and avocados were grown and animals such as deer, birds and peccary were hunted.

The Mayans caught fish using nets, trap lines and trained cormorants. The cormorant’s necks were tied so not to swallow the fish and they would catch the fish and bring them back to the fishermen

The Mayans influenced a lot of modern day foods and many restaurants in the Yucatan Peninsula have food that is inspired by the Mayans.

I recently stayed at the fabulous Grand Velas Riviera Maya, a
riviera maya all inclusive resort, in Playa Del Carmen Mexico and had a chance to sit in on a Mayan cooking class. The Grand Velas is a luxury resort and has several highly acclaimed chefs. With the word Maya in their name it is appropriate that they cook Mayan inspired food. Chaka, one of their many restaurants, offers Mayan inspired food and it was their chef that did the cooking class.

Grilled Shrimp in Chilmole Sauce is one such meal the Mayans would have made but this one has a modern spin to it.

Devein and wash the shrimp. Marinate with oil, salt and pepper. Grill shrimp for 5 minutes.

Cook Black beans until soft. In a hot pot add onions, lard and garlic. Cook until toasted then add black beans and black Recado seasoning and cook on low heat. After cooked, mix in blender. Cook again if necessary and add more salt to taste.

Sauté onion and garlic in oil. Add rice and cook on low heat until slightly brown. Add water and bring to boil. Once boiling add coriander and cook about 2 minutes. Mix in the cream and cook until done.

Blanch the vegetables then sauté in butter, salt and pepper.

Julienne the onion then mix with orange juice oregano and salt.

Plate the rice add the shrimp, drizzle shrimp with the chilmole sauce then add the vegetables and garnish with the pickled onions.

The last step is the best. Dig in and enjoy. 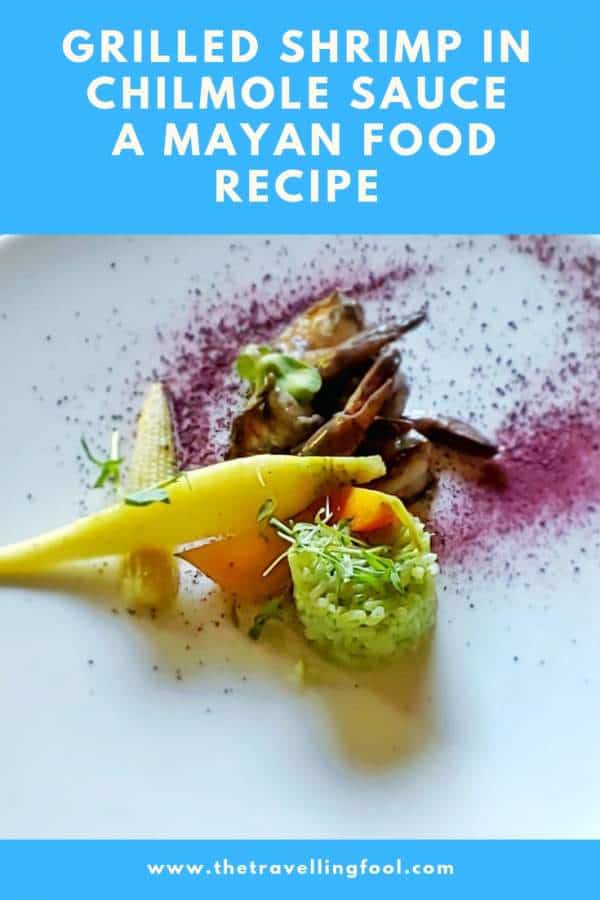