Home » So What Do Rocky Mountain Oysters Taste Like?

Being invited to attend the Virginia City Nevada Rocky Mountain Oyster Fry is one thing, but when you are asked to judge the contest you know there is no getting around it, you’re gonna eat some nuts. 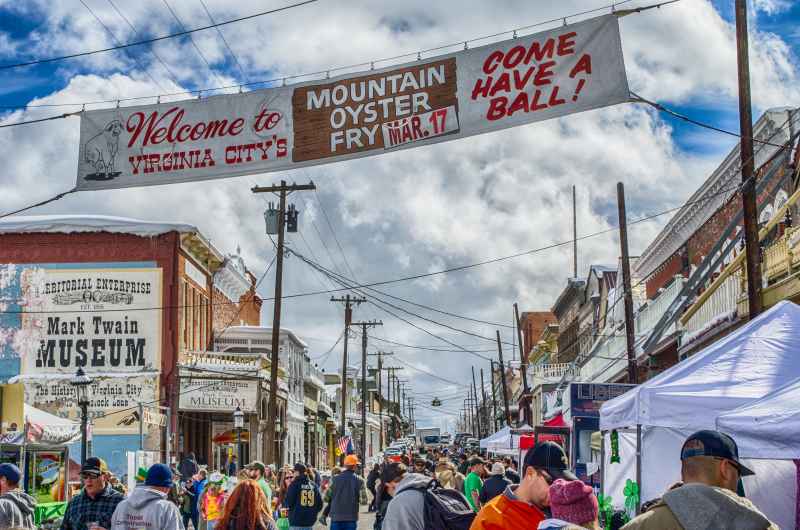 I remember the message. “So Bob, are you adventurous when it comes to food?” That innocent little message started in motion what would become me sitting at a table eating bull nuts. Rocky mountain oysters, cowboy caviar, swinging sirloin, calf fries, huevos del toro, tasty testes, the original sack lunch or whatever you want to call them. James Hills had asked if I would be part of a group of guys for a trip to western Nevada. We would visit Reno, Carson Valley and Virginia City. Along the way we would have a few whisky tastings, beer tastings and just have an overall good time with a bunch of guys. 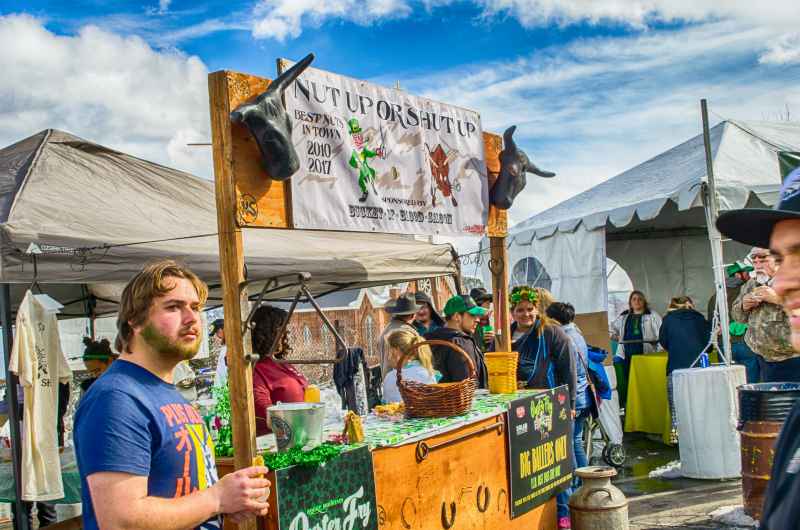 Having never tasted the “delicacies” of the bovine nut sack I did the only sensible thing. I googled it. According to some, it tasted like venison. Having eaten venison on many occasions I felt comfortable that I could manage the task at hand. 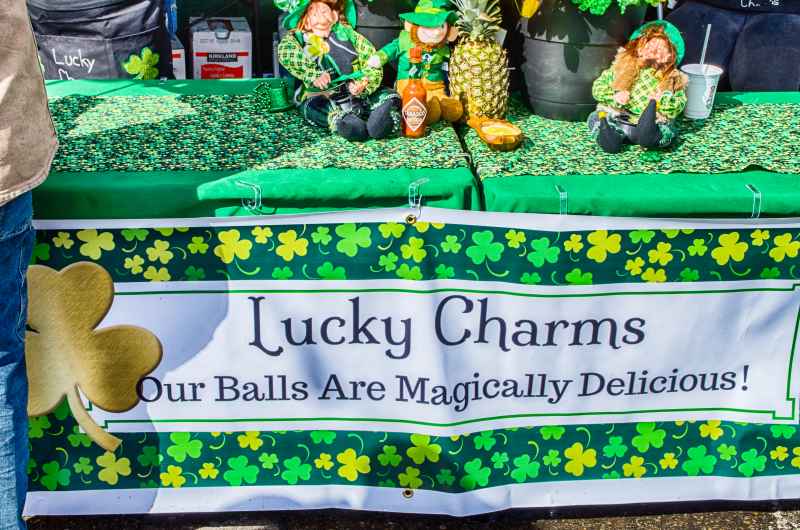 Virginia City Nevada got its start as a mining town in the 1800’s when the Comstock Lode was discovered. The largest silver deposit discovery in the United States drew miners and notable people from all over. In 1879 Virginia City was called the richest city in the United States. Fortunes were made and lost, mansions, saloons and hotels were built and at its peak over 25,000 people lived there. It was also in Virginia City that Samuel Clemons first used his pen name “Mark Twain” when he worked as a reporter for the Territorial Enterprise newspaper. 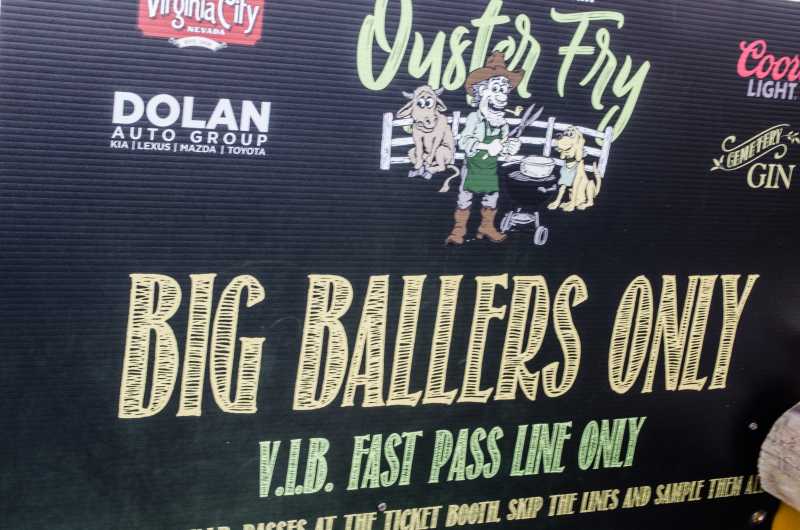 Virginia City today looks a lot like it did during the boom days. Presented with the Distinctive Destinations Award by the National Trust for Historic Preservations, the town looks like it would have when Mark Twain might have stopped into the Bucket of Blood Saloon for a drink. The town today still has several saloons that were hangouts in the boom times including the Washoe Club where the now famous “Millionaires Club” was born, the Delta Saloon where the suicide gaming table, so named since three owners committed suicide after losing fortunes, is on display, The Ponderosa Saloon where you can take a tour of an old mine in the rear of the saloon and many more.

Virginia City is also a popular place for ghost hunters. The old buildings are said to be home to several spirits. The Washoe Club even has a 30 minute ghost tour where you walk upstairs in the old rooms and hear about the many strange noises and “sightings” people have had. I took the tour and can say nothing out of the ordinary happened to me but I am not going to say that they don’t exist. Better safe than sorry, right? 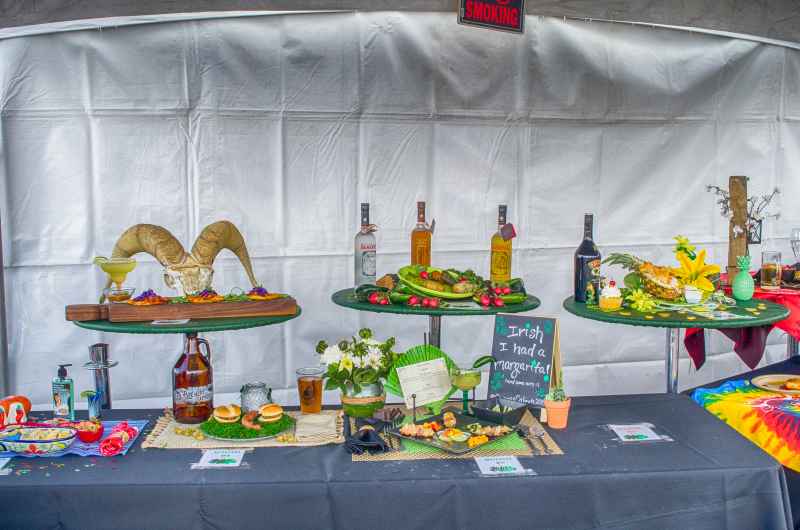 As one of the most popular destinations in Nevada there is something always going on in Virginia City. From motorcycle rally’s, camel races, classic car rally’s and yes, the Testicle Festival of the West. I just named it that, feel free to use it Virginia City.

The Rocky Mountain Oyster Fry is held each year in March coinciding with St Patrick’s Day. While other places have parades, the folks around Virginia City break out the balls and start cooking. There are teams of cooks that serve up various renditions of the beefy family jewels. Upon arriving in Virginia City that morning our group consisting of James Hills, Rick Faquet, Colby Shipwash, Tom Fischer and yours truly found our way to the festival area and the judging tent. 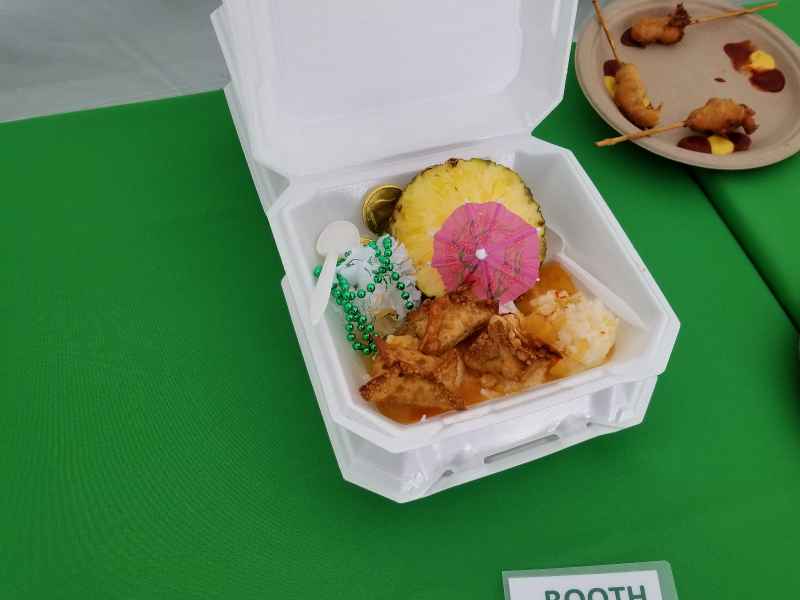 I have been to a lot of out of the ordinary festivals but nothing like this.

We originally thought we were going to be token guest judges and our votes wouldn’t count. Like being the Marshall of a parade, you show up wave and get your photo taken. No Sir, that was indeed not the case. While there were two other judges, we were actual, bonifide, judges. Which meant we would need to taste, chew, swallow and grade each of the 14, yes fourteen, entries in this nutty culinary contest. 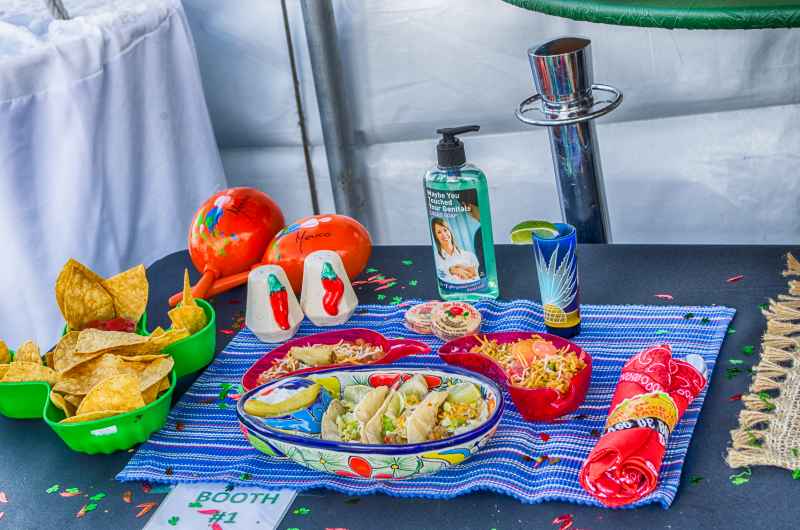 For those that have never judged a Rocky Mountain Oyster contest there are criteria in which the entries are graded. Things such as presentation, taste, creativity and others are graded on a scale of 1-10. Who knew that the lowly, or lowly placed, bull testicle could be served in so many ways.

Amid the gallons of beer being served and consumed, contestants in the cook off were busy grilling, frying and concocting various dishes for us to try.

I have to tell you that upon staring at a table full of nuts in various forms there was a little hesitation at first. Should I go for the testicle egg rolls, the bull nut chili or just dive into the slider? Knowing I had to grade all fourteen, yes fourteen, entries I knew I needed to get started or It would be like when I was a kid at the end of supper staring at that plate of liver while everyone else had finished. So grabbing a beer I reached for the egg rolls and headed to the table. 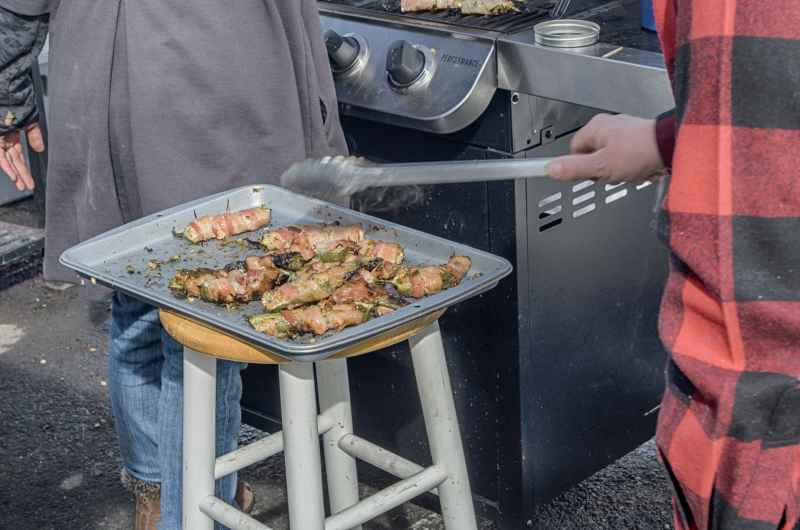 If I hadn’t known what was in the eggrolls they would have probably tasted better but even knowing they weren’t bad. So for the next hour or so our merry band of adventurers sampled testicle corn dogs, bacon wrapped jalapeño poppers stuffed with you guessed it, bull nuts, stuffed chilis, testicle sliders, chili, teste tacos and more.  Some were better than others.

Now I forgot to say the temperature was hovering just above 25-30 degrees F or around zero C. I tell you this because as the entries sat on the table they quickly became cold. While some entries had some creativity some, as in the slider, was a slice of testicle, grilled and put in a slider bun. Now as authentic as that is, it tends to get a little rubbery and chewy as it gets cold. 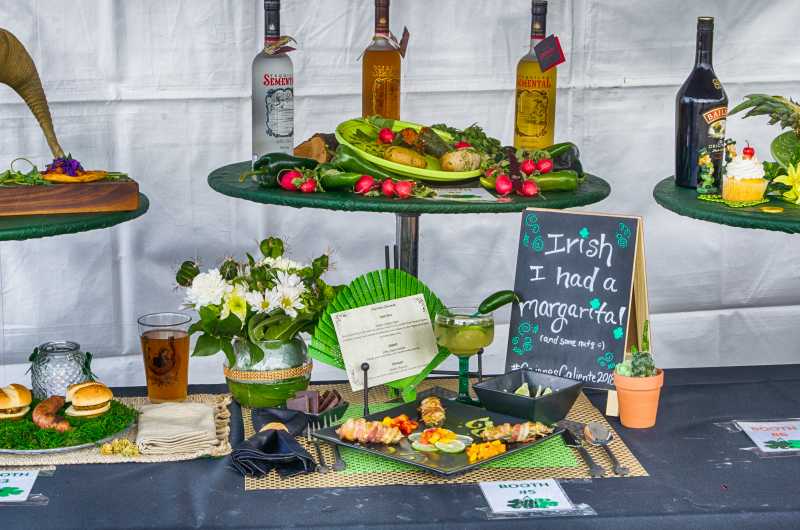 Remember where I read someone saying that rocky mountain oysters tasted like venison? He lied. He didn’t misrepresent, we don’t have a difference of opinion, there isn’t any misunderstanding, he flat out lied. I can’t really describe the taste but I can tell you with absolute certainty that bull nuts taste nothing remotely like venison. In fact, I want to apologize to all the deer for being slandered by whoever said it and continues to perpetrate this misleading myth. So Dear deer. I’m sorry. 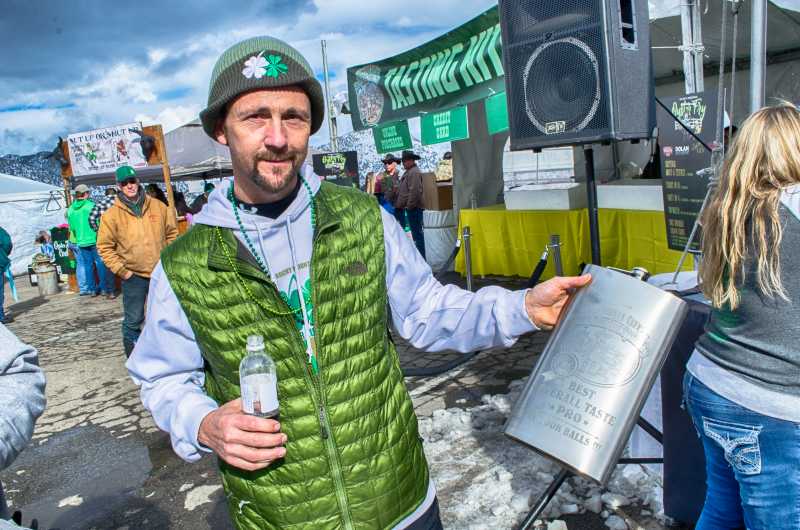 I have to hand it to the crowds that braved the cold and snow to stand in line for the various nutty creations. Of course, there was plenty of beer, which I have to tell you is the perfect pairing for the culinary dishes that were presented. Whisky would work also. Truthfully anything to take your mind off of what you were consuming was helpful. Not that all the entries were bad, far from it. However, no matter what you thought of the testicle egg rolls, poppers, chili or anything else the thought was always in the back of my mind of what I was eating. 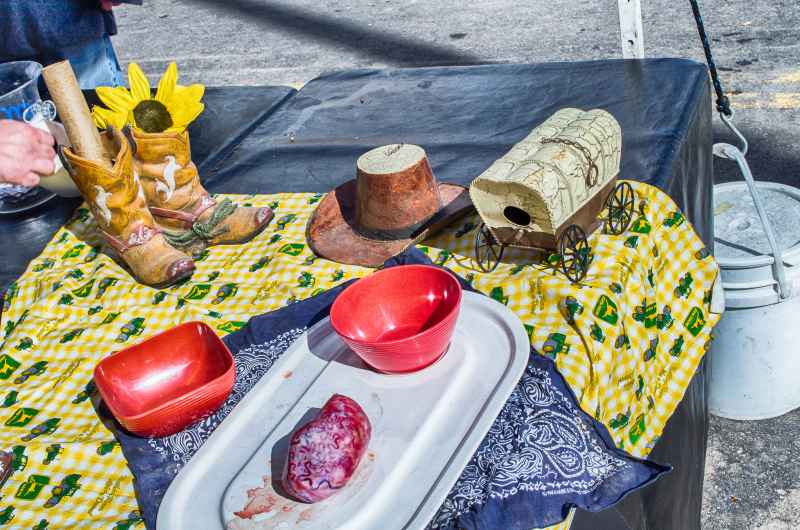 At one point I watched as a fresh specimen was being sliced and prepared. When the knife sliced into the aforementioned specimen every guy looking on instinctively placed a hand over his crotch and winced slightly.

Once all the judging was completed the votes were tallied and awards were handed out. With the various trophies also comes monetary rewards. They actually have two categories. One professional for restaurants that enter and one amateur for the home testicle cook.  Chuy Gutierrez, who owns a Mexican restaurant in Reno, won the top prize in the professional category with his testicle stuffed chili peppers.

While the acknowledgement of winning is nice I think most of the teams compete just for the fun of being there, enjoying the crowds and the experience.

So, what do Rocky Mountain Oysters taste like? Not venison, that’s for sure. 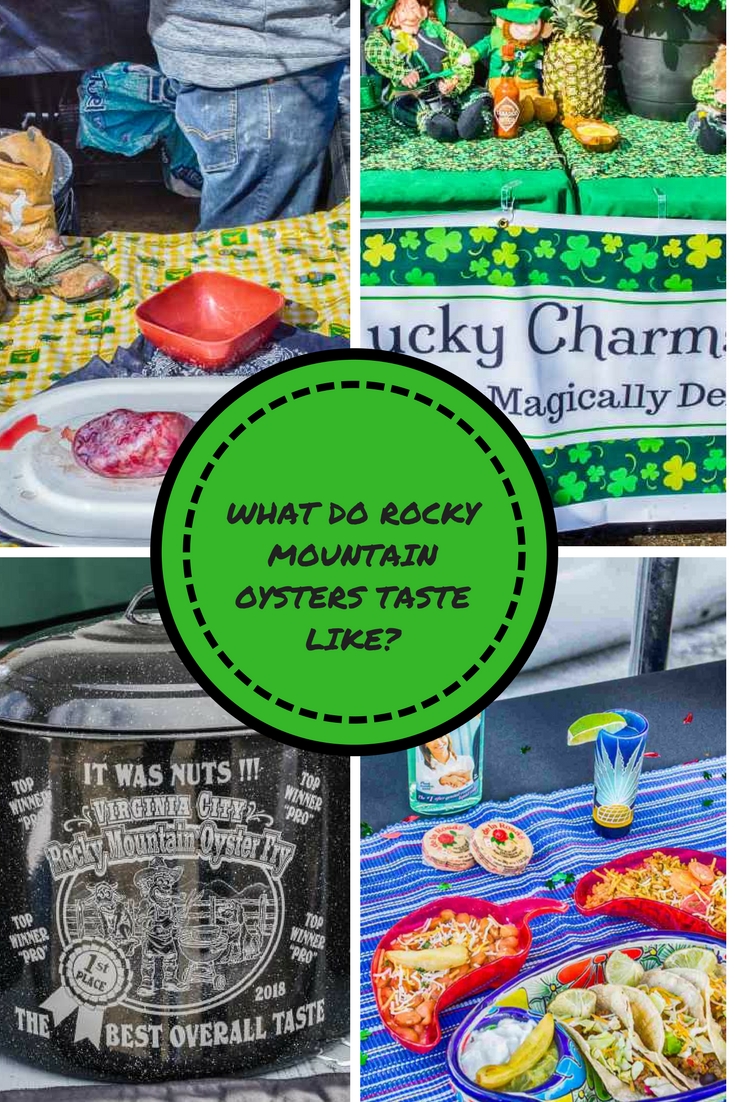 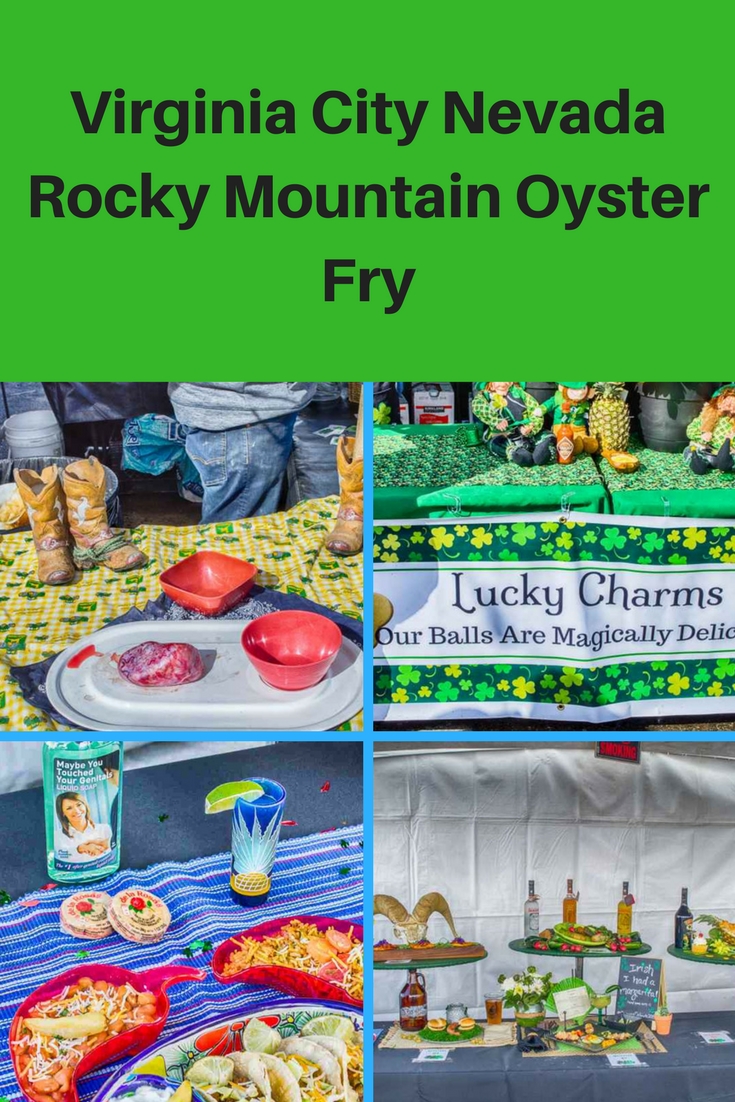