For those looking for the perfect luxury escape in St Augustine Florida, The Collector Inn offers exceptional quality, first rate service along with a unique and memorable stay.

St Augustine Florida is a historic city and The Collector Inn is a historic property comprising of nine historic homes in a luxury boutique setting. Spanning a city block, the property was once owned by Kenneth Worchester Dow. Dow, the only child of a wealthy businessman who made his fortune in wholesale lumber and real estate, devoted his life to traveling the world and collecting antiques.

READ WHAT OTHERS SAY ABOUT THE COLLECTOR INN ON TRIPADVISOR

In the 1930’s, Dow bought the 1790 Prince Murat House, once the home of Napoleon Bonaparte’s nephew. Over the next few years Dow and his wife bought eight neighboring historic buildings and used them to house his massive collection.

Other buildings on the property include the Star Building, a former general store built in 1899 that serves as the entrance lobby. The Canova House was built by Antonio Canova in 1840. He also built the house now called the Dow House in 1839. Mr. Dow purchased the home in 1941 from St Augustine’s oldest living resident, who was 98 at the time and continued to live in the home until the age of 103.

Howell’s House is a large colonial revival style home built in 1909 and named after William Dean Howells a famous author who spent winters in St Augustine and welcomed guests Mark Twain and Sinclair Lewis. The Rose House was built in 1907 and named after Jean Gordon an authority on roses, who once rented the home.

The Spear House was built in 1899 and was originally a carriage house. Bookkeeper John Henry purchased the house added a second story and later converted it to a rooming house. In 1906 Henry built the Worchester House for his wife.

The bar at The Collector Inn is named “The Well” and was built around 1915 as a garage for the Howells House.

All of these historic properties cover a city block and the grounds are designed so that there are small sitting areas, fountains, gardens and places to sit and relax.

The property itself is a historic area as well. There are plaques on the property showing the locations of The Kings Road Bridge, built sometime around the 1570’s. The Rosario Defense Line, which was an early fortification built in the 1700’s and a plaque on the location where President Lincoln’s Emancipation Proclamation was issued in Florida in January 1863.

The current owners purchased the property in 2013 and after a 5 year, 9 million dollar renovation opened The Collector Inn, a boutique luxury hotel. The hotel has been awarded as a 4 diamond AAA property and caters to adults only, 16 years plus, guests.

The Collector Inn has 30 rooms in the nine historic homes on the property. Each room has a kitchenette, interactive I-Pad for hotel services, luxurious bed linens and bathrobes. The hotel also serves a continental breakfast that can be delivered to your room. Some rooms have a private balcony.

The Manager, Charlie Robles, has made it a priority to have staff that pay attention to every detail and make exceptional service the hallmark of the hotel.

There is a heated pool, lawn games, afternoon snacks, bicycles available and an afternoon and late night happy hour at The Well bar. There is even a small amphitheater were live music is played.

There is no parking available at the property but valet parking is offered and the vehicles are parked in a secured lot nearby.

Although the accommodations and the property itself are quite historic that isn’t the sole reason why you should stay there.

Whenever you book a stay at a hotel or resort you want to have a comfortable and memorable stay. The Collector Inn is just such a place, where you have a luxury escape all to yourself with all the benefits of an attentive staff.

The Collector Inn is located less than a half mile to the historic district at: 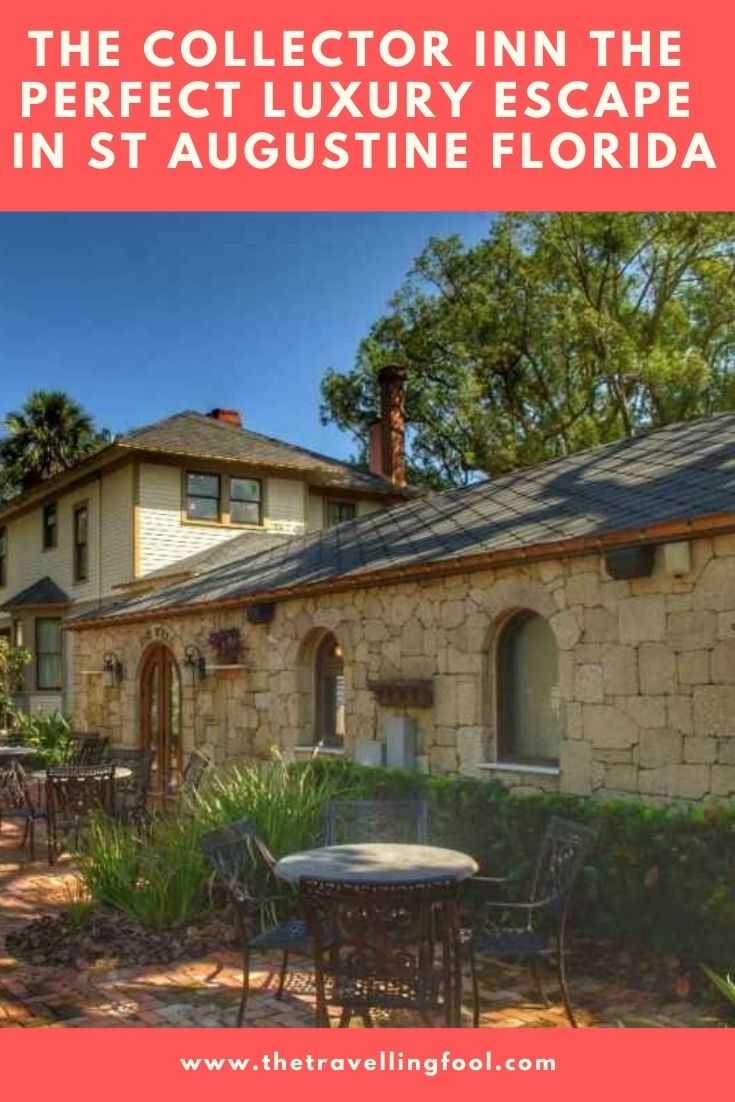