Home » You Have Heard Of The Alamo But What About Goliad?

Everybody remembers The Alamo but few outside of Texas know about Goliad. Some might say that Goliad had as much or more to do with the fight for Texas independence as did The Alamo. 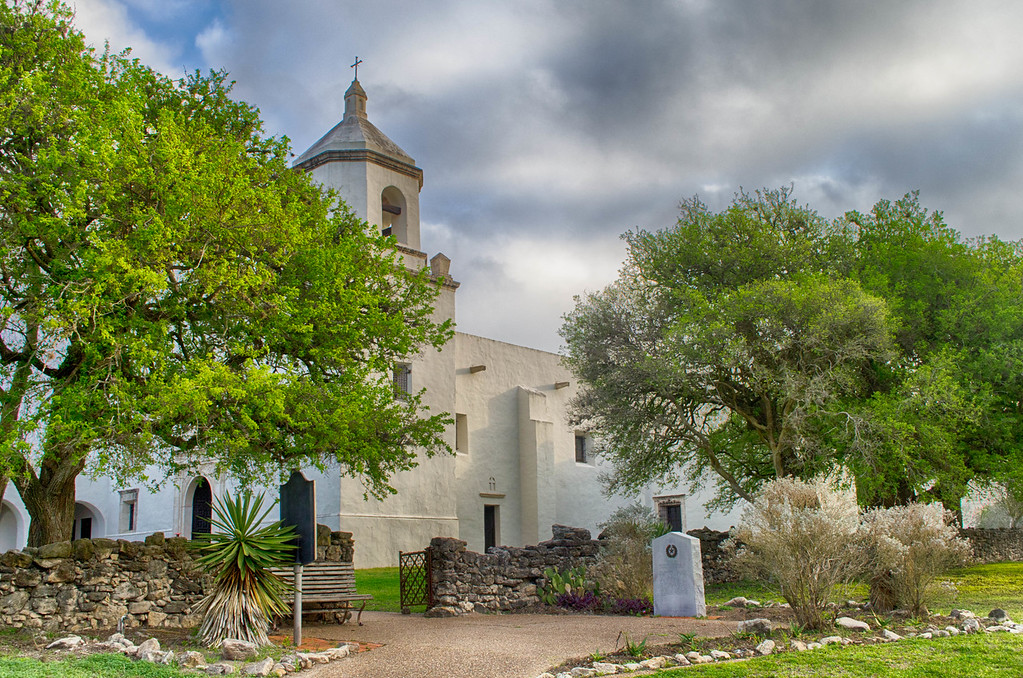 In 1749 the Spanish relocated a Mission and a Presidio to the Northern frontier of its North American colonies. Located on the banks of the San Antonio River, the mission and Presidio were meant to attract settlers to the area. 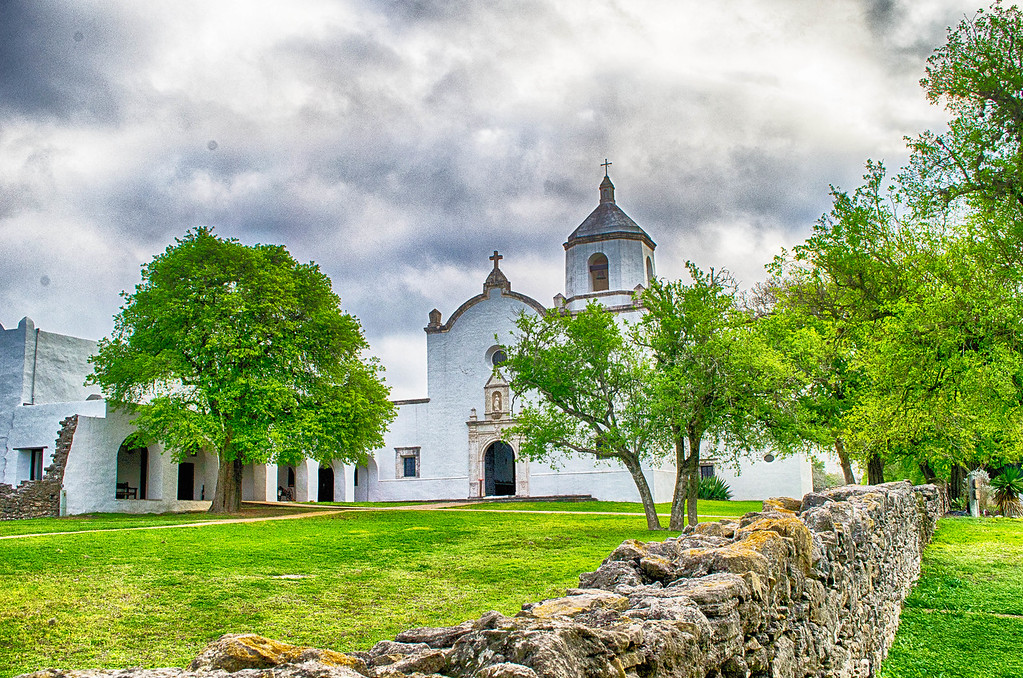 The Mission Nuestra Señora del Espíritu Santo de Zúñiga was established by the Spanish Crown and the Catholic Church as a way of civilizing and Christianizing the native Karankawa, Aranama and Tamique people and make them Spanish citizens. The native tribes agreed to move into the Mission in exchange for protection, food and shelter and as a result the gradual erosion and eventual destruction of their tribal cultures occurred.

The Mission remained active until 1830 when declining native tribe populations, lack of money and political turmoil in Mexico forced it to close. 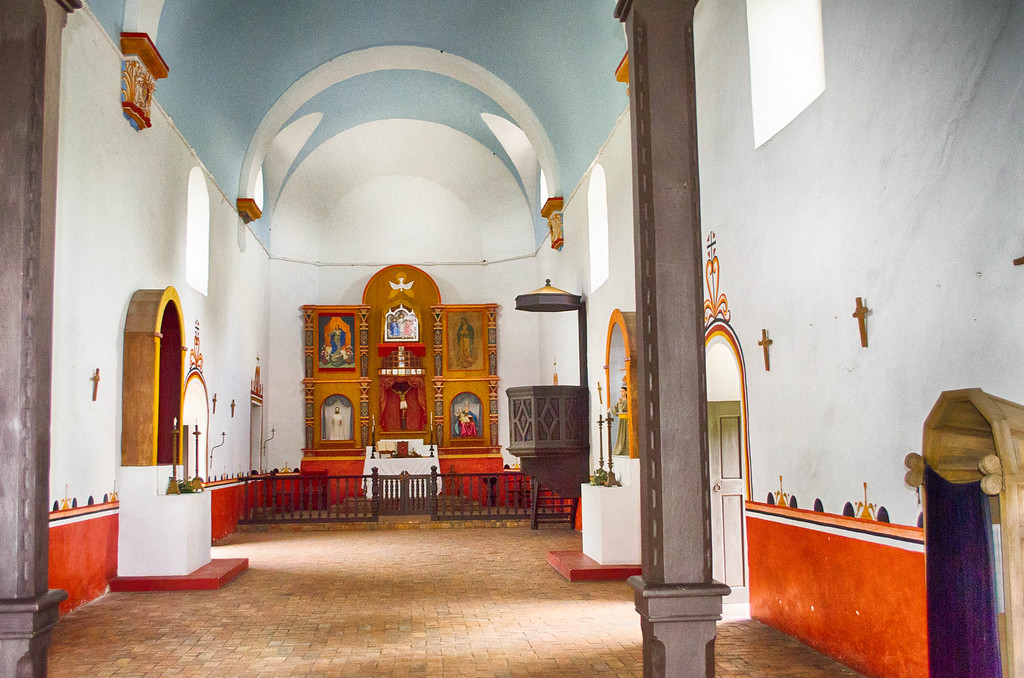 From 1848 to 1856 the city of Goliad leased the area and it was used as a school. Over the years some of the stones from the Mission were used by residents of Goliad for building and the site fell into disarray.

In 1931 the site came under control of the State of Texas Park system and reconstruction began. Over several years, the site was brought back to the way it was in 1749. Some of the original structure is still in place and can be seen while touring the area.

In 1977 the site was placed on the National Register of Historic Places. 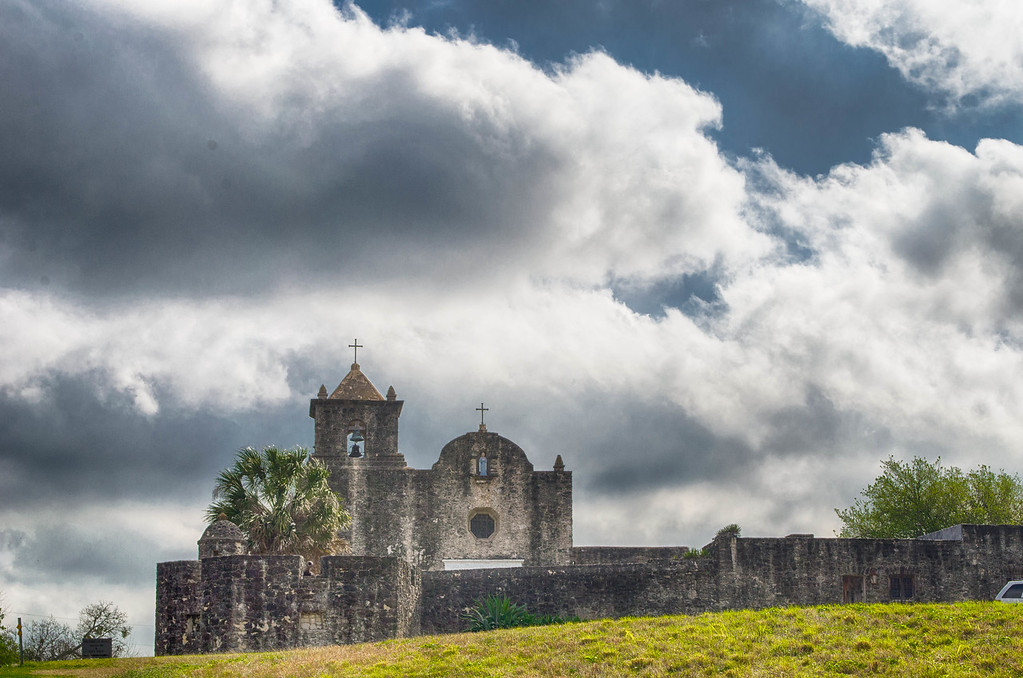 At the same time the Mission was relocated, so was the Presidio La Bahia. Throughout the Spanish colonial period the Presidio protected the nearby Mission as well as the Texas coastline. 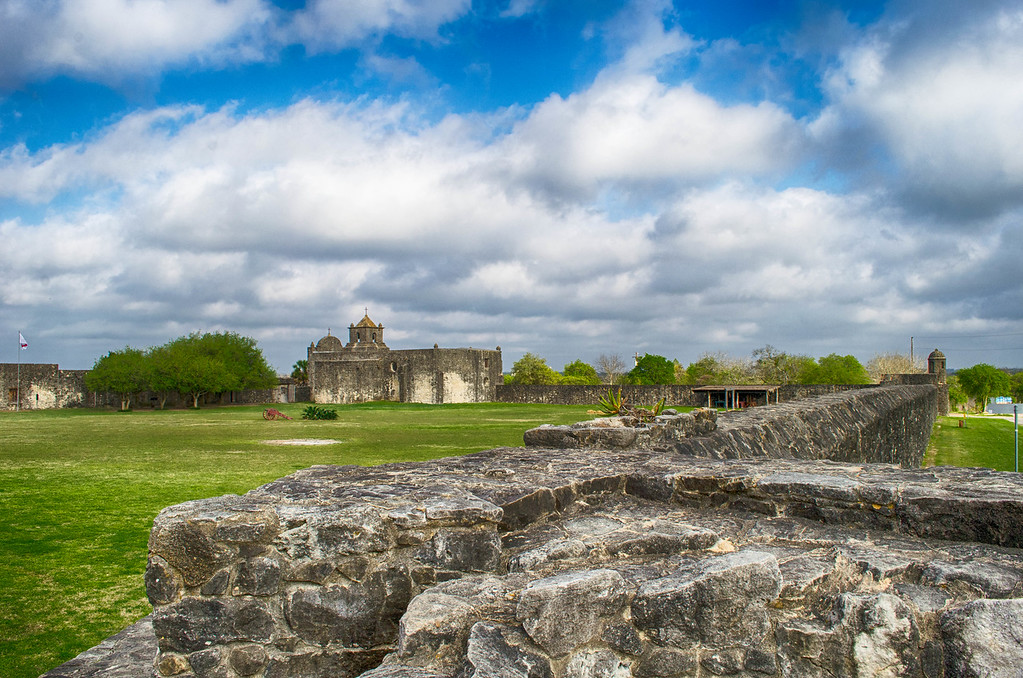 The La Bahia played a major role as a fort and was the main military post between San Antonio and the Rio Grande. Originally the Presidio had wooden buildings and grass huts but they were replaced by stone buildings, quarters for the troops and a stone wall surrounding the compound with rounded limestone bastions to mount cannon, an arsenal, and the Presidio chapel. In later years, the Presidio La Bahia would play an important part in Texas Independence. 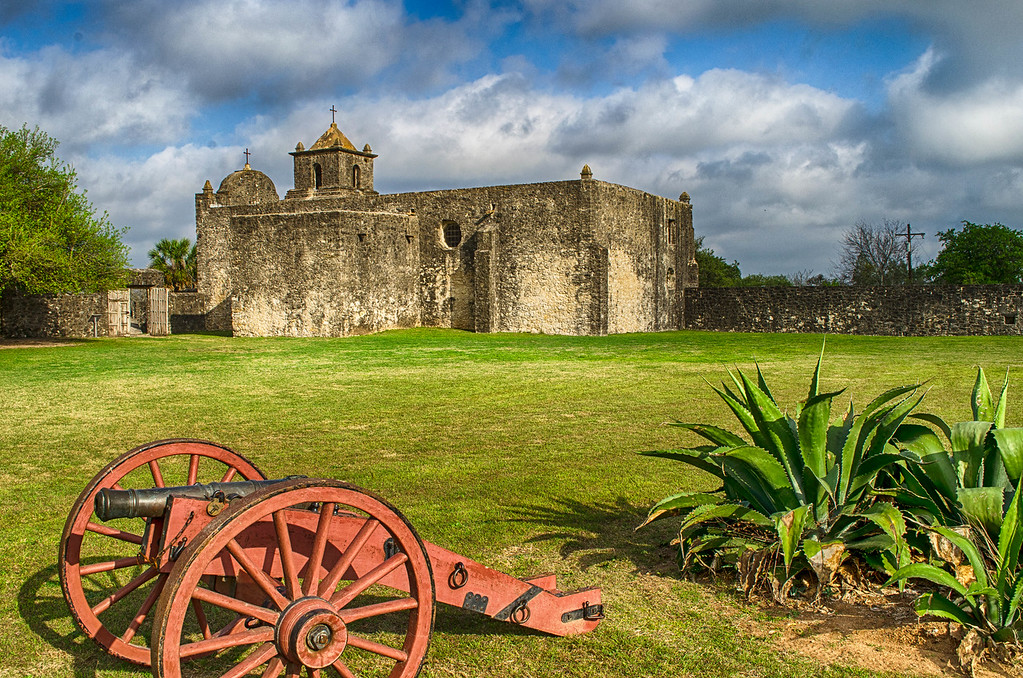 The Presidio was the site of several battles over the years and Spanish, Mexican, militia units and others occupied the fort at one time or another. Soon after Texas won independence in 1836 the Presidio was abandoned. For a while it was the property of a local judge, who used the chapel as a residence. 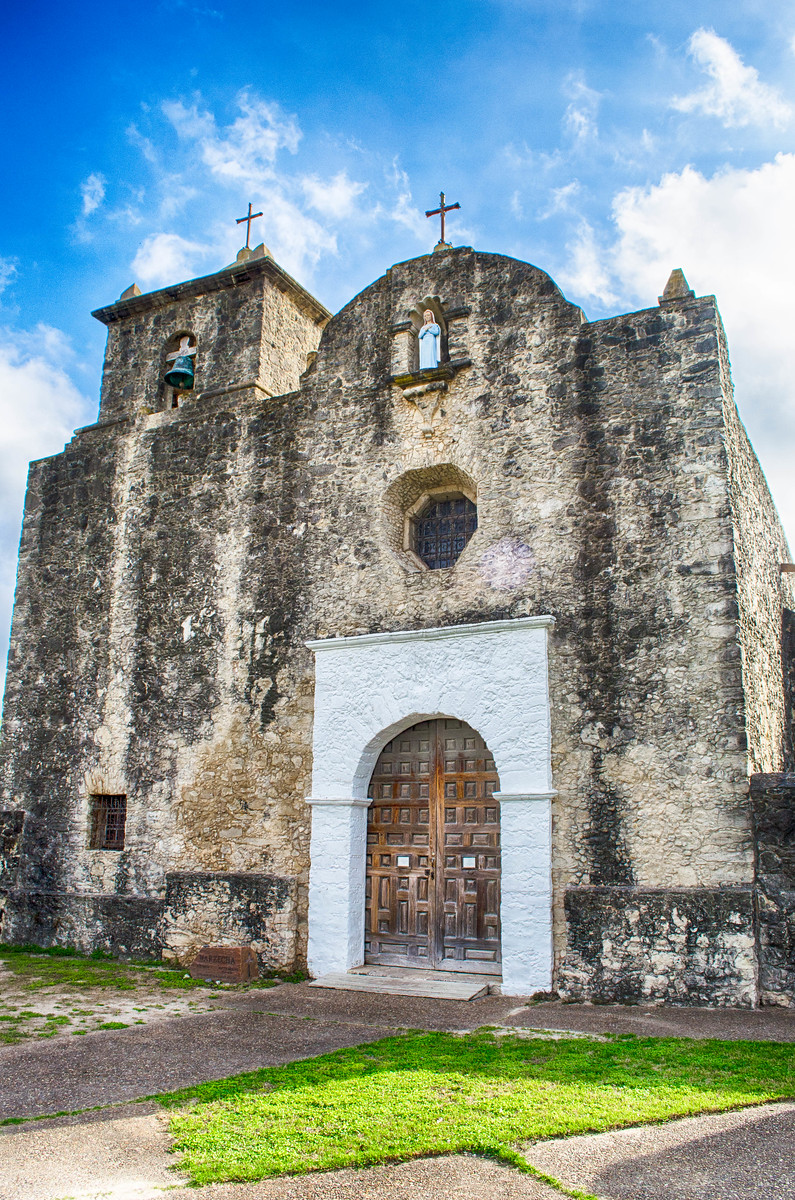 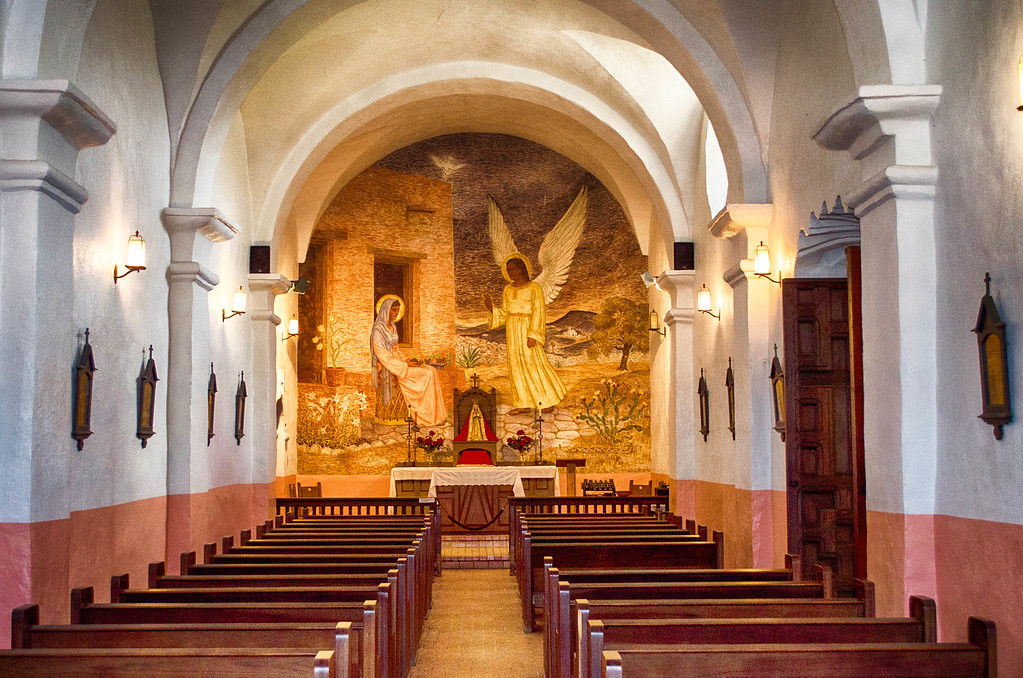 In 1853 the Catholic Church once again became the owner of the chapel. The surrounding Presidio fell into disrepair until 1963 when a massive restoration effort began to document the site’s remains, and reconstruct many of the Presidio’s former buildings. In 1967 the walls and many of the buildings along with the bastions, had been returned to their 1836 appearance. 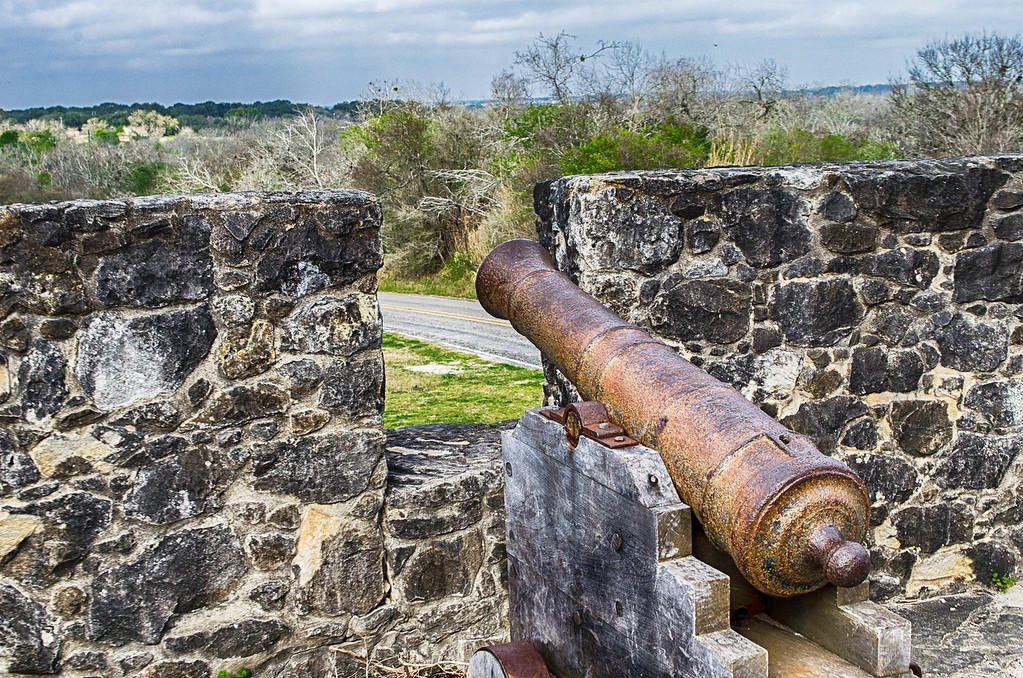 The Presidio is both a State and National Historic Landmark and today the Presidio La Bahia is open to visitors, you can even stay the night in the guest quarters.

Check out the TripAdvisor reviews on the Quarters at La Bahia 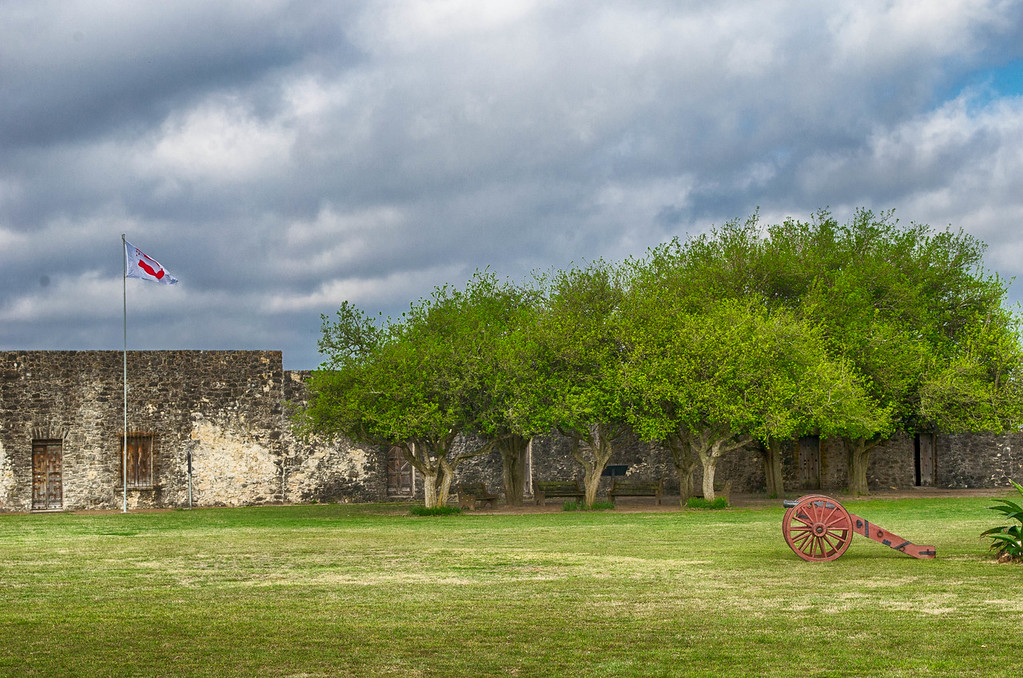 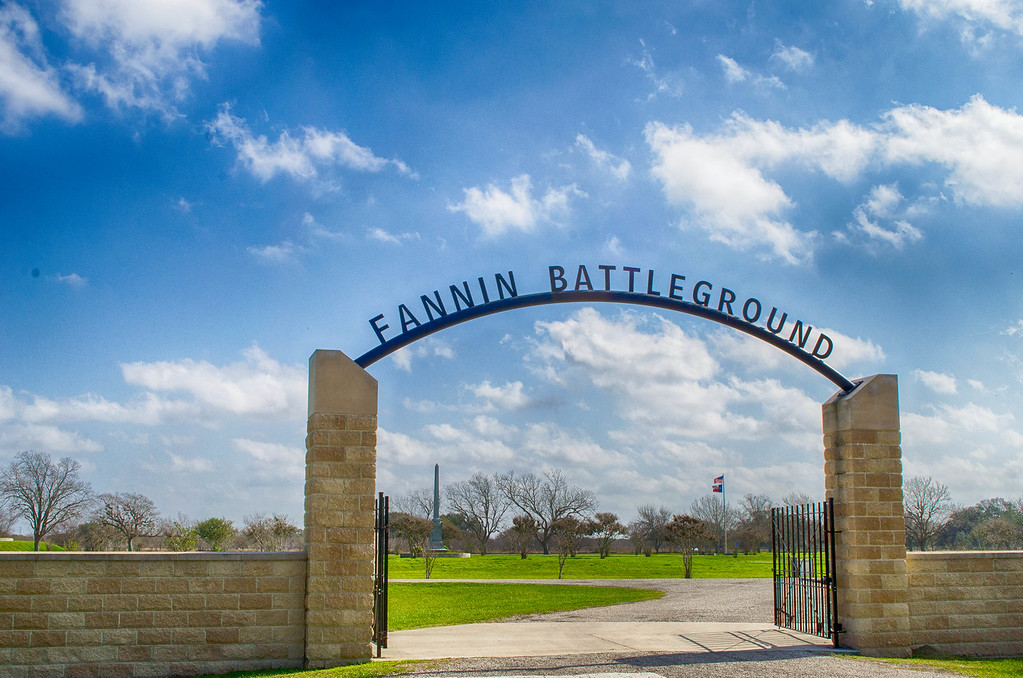 About seven miles east of Goliad, just off Hwy 59, lies the Fannin Battleground. During the war for Texan Independence, Colonel James Fannin arrived at the port town of Copano with four companies of the Georgia Battalion. Hearing of the plight of the defenders of the Alamo, Fannin responded for help and set out on a 90 mile journey to San Antonio with several hundred men, four cannon, spare muskets and supplies.

Fannin’s relief effort broke down at the San Antonio river and he along with his men occupied the Presidio La Bahia. Hearing of the Alamo defeat on 6 March 1836, Fannin was ordered to take his men and retreat back towards the East destroying anything they could along the way to slow down the Mexican Army advance 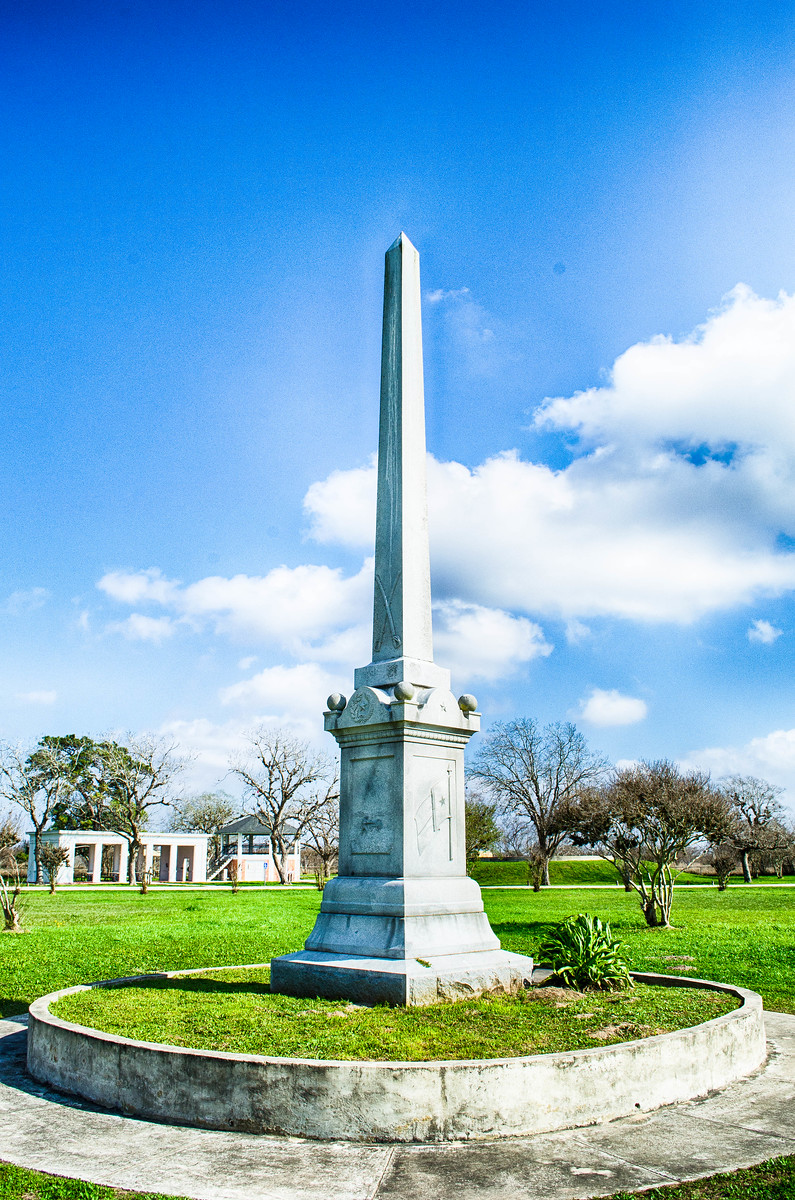 On March 19, 1836 Fannin set out but only made it seven miles before being confronted by Mexican cavalry. A battle, also known as the Battle of Coleto Creek, ensued and the Mexican forces lost between 200-300 men while Fannin lost seven to nine with sixty wounded.

Facing increasing Mexican troops and laden with supplies and broken down wagons, Fannin surrendered the next day after being reassured his men would be treated as prisoners of war. 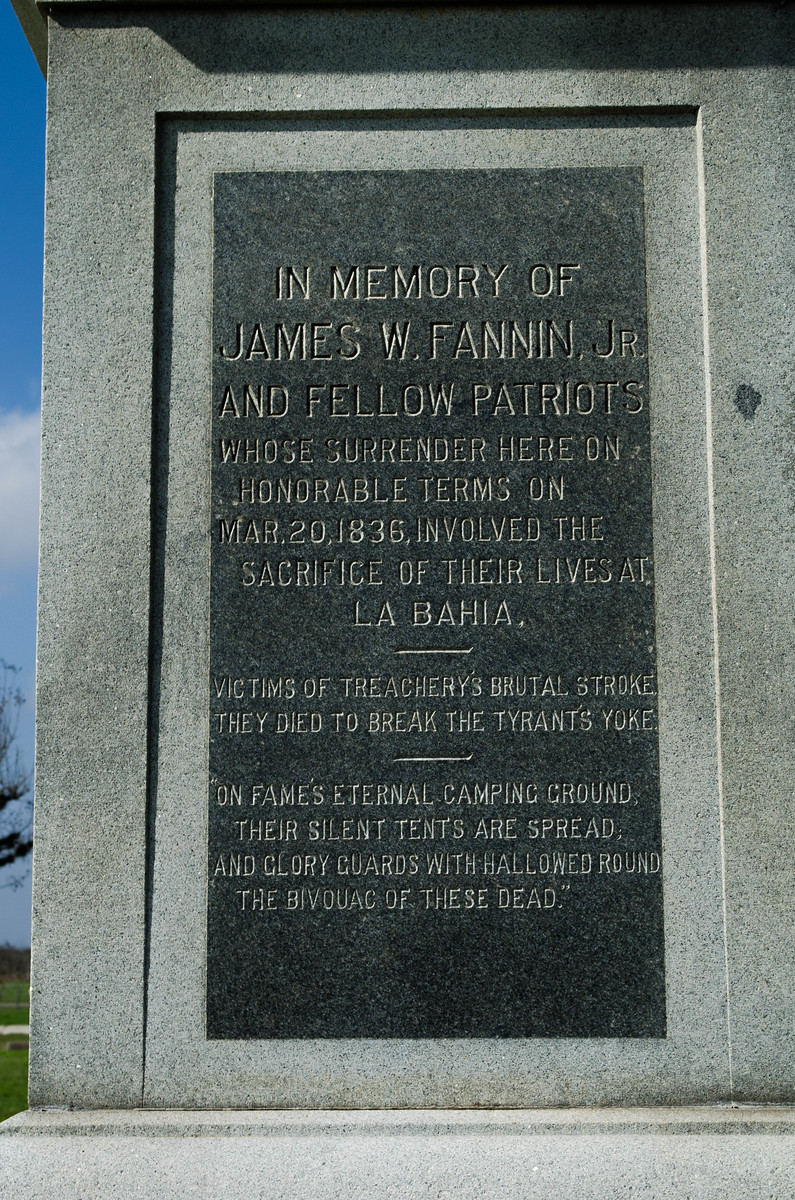 The men were marched back to the Presidio La Bahia and imprisoned. On March 26, 1836 word came from Gen Santa Anna to the Mexican Commander General Urrea to execute Fannin and his soldiers. The next day on Palm Sunday all the men who could march, about 400, were taken out in three columns and once away from the Presidio they were shot at point blank range. Around forty who could not march were shot inside the walls of the Presidio and Colonel James Fannin was the last to die. Twenty-eight men escaped by pretending to be dead and a few managed to rejoin General Sam Houston and fought at the final battle of San Jacinto 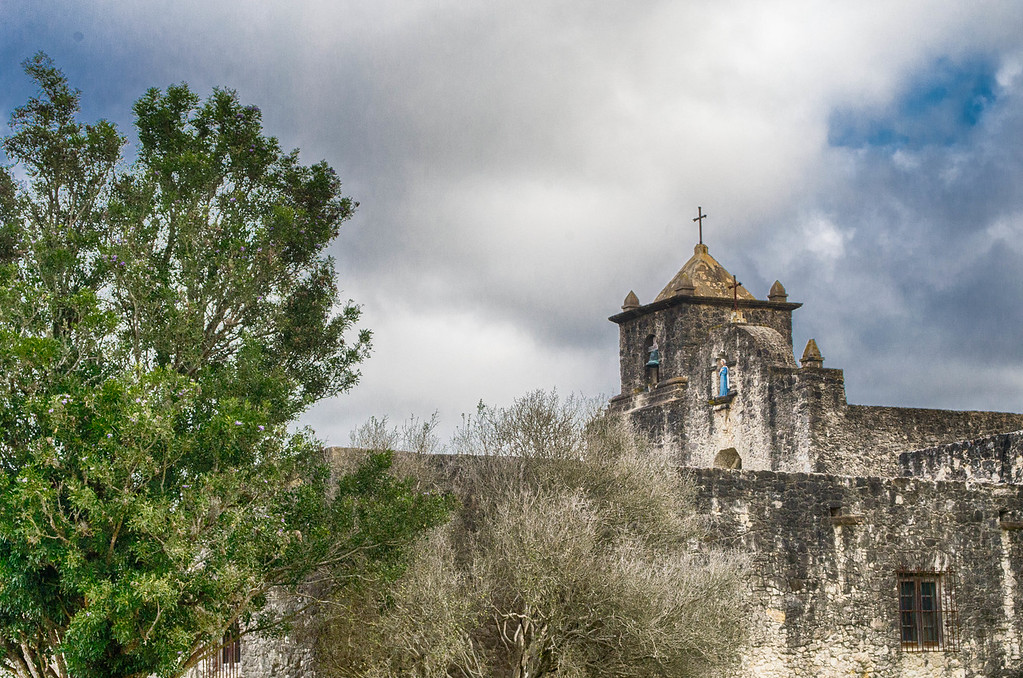 Some were saved by the “Angel of Goliad“, a lady of Mexican birth named Francita, Francisca, Panchita, or Pancheta/Panchita with surname Alavez, Alvarez, or Alevesco.

Fannin and his men are buried just outside the Presidio La Bahia and a monument was erected in 1936. 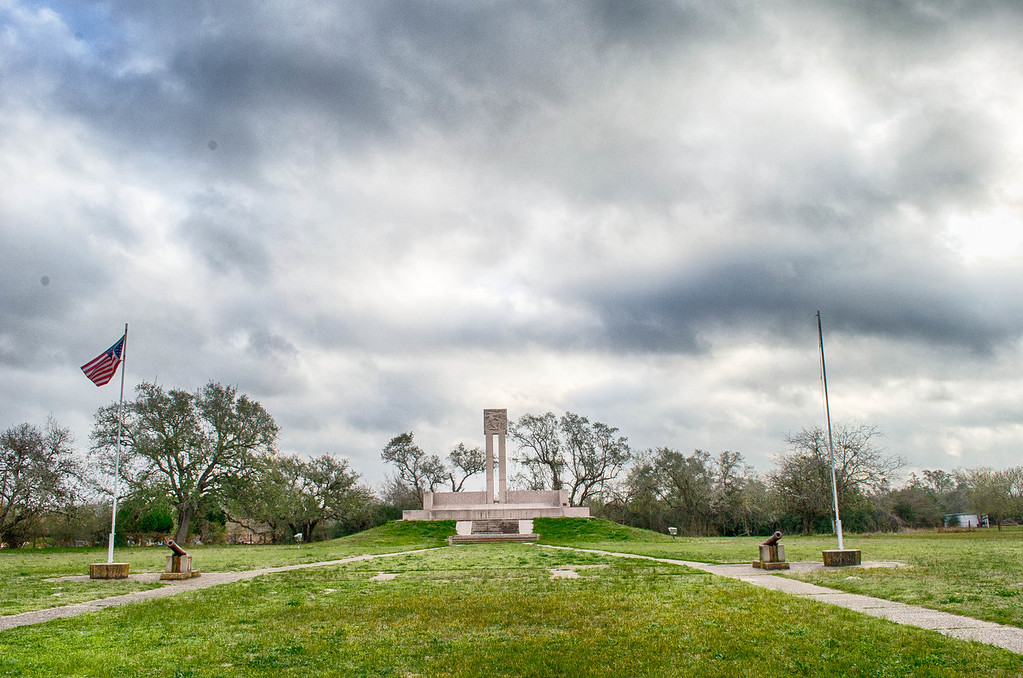 After the Goliad Massacre, as it was later called, battles would hear the cry of “Remember the Alamo” and “Remember Goliad”. While the defenders of the Alamo died in battle, Fannin and his men were massacred after surrendering and being given reassurances they would be treated as prisoners of war. 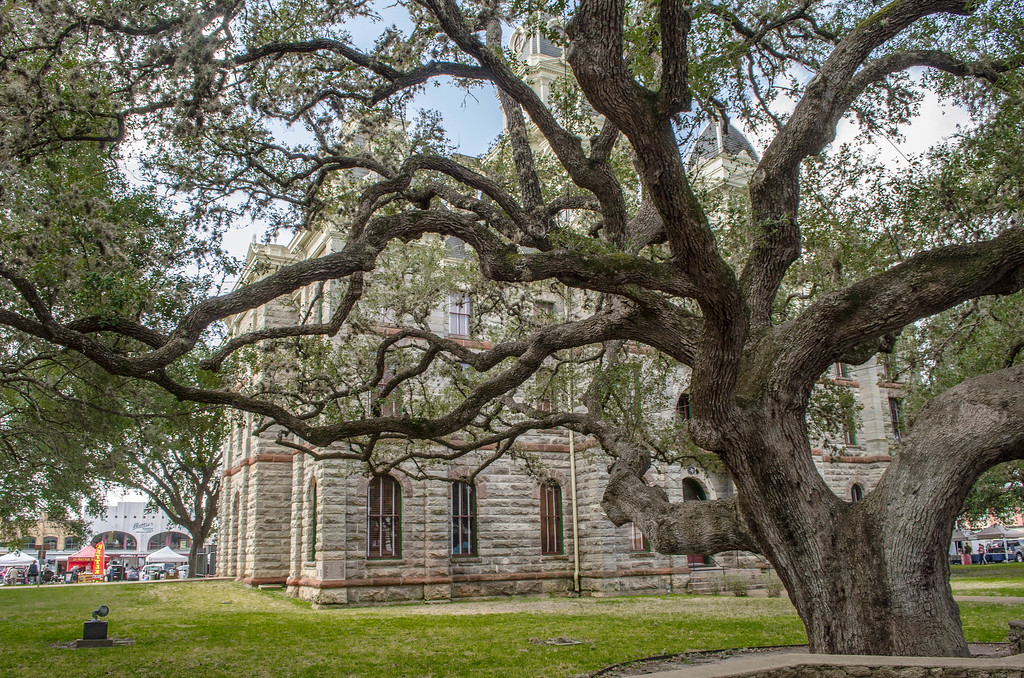 Today Goliad is a town centered around ranching and farming, with a population of around 2,000. The County Courthouse sits on the town square where market days are held once a month and you can stop by and look at the Hanging Tree. For twenty-four years, court was held under this large oak tree and sentences were carried out on the spot. Estimates are the hangings numbered in the low hundreds. 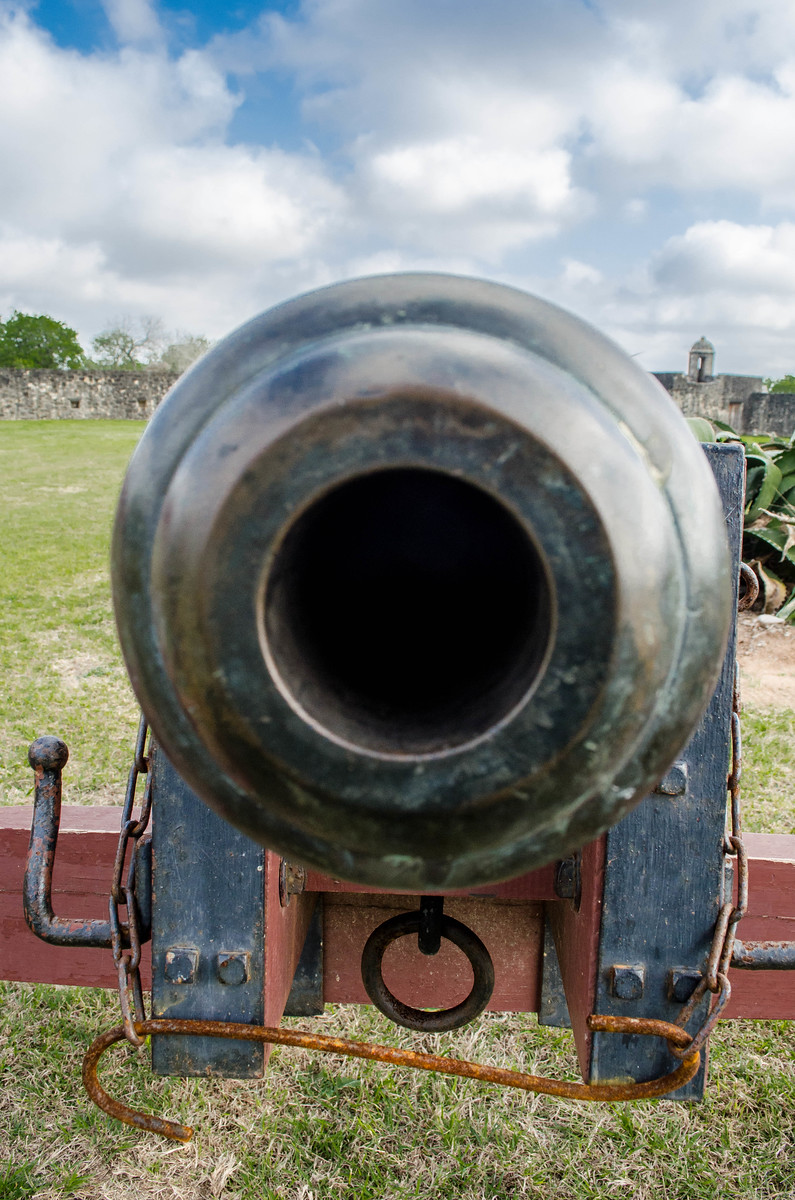 You won’t get hung in Goliad today but you can step back into history and learn about Spanish colonial Texas and Texas Independence.

Goliad is located at the intersection of  Hwy 59 and Hwy 183, 154 miles southwest of Houston and 91 miles southeast of San Antonio.

Check out TripAdvisor reviews on some popular Texas Hotels

Looking to getaway? These guys have great deals on some fantastic destinations. 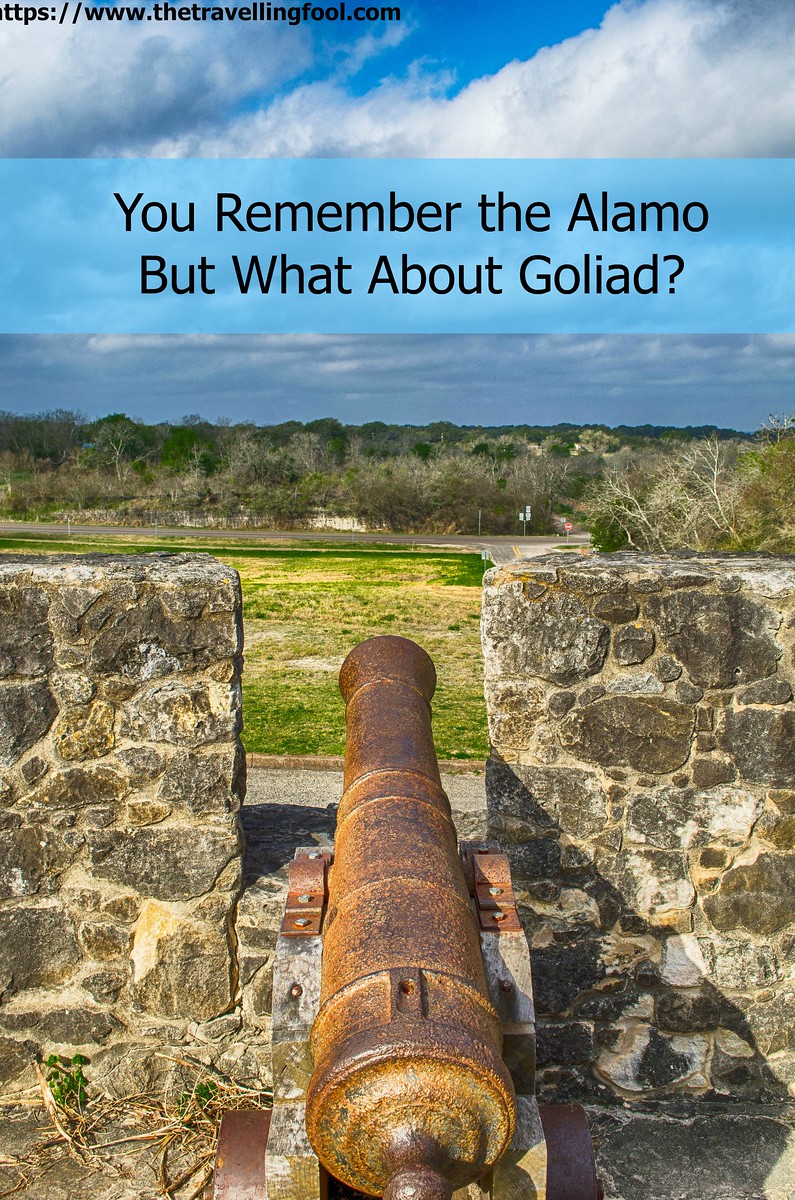