I recently had an opportunity to visit Nepal as an invited delegate for the Himalayan Travel Conference. The trip was hosted by Nepal Ministry of Culture Tourism and Aviation and sponsored by Nepal Tourism, the Nepal Chapter of PATA and numerous other sponsors.

Kathmandu Nepal is home to remarkable cultural sites. To many in the West, Kathmandu and Nepal in general are exotic places only seen in movies and read about in books. Once popular as a stop on the hippie trail, the Capital of Nepal has a long and rich history and is home to religious and cultural sites.

Although the devastating Kathmandu earthquake in 2015 destroyed many historic sites in Nepal, many were unaffected or only damaged. Many of the ones destroyed are currently being rebuilt.

With over 2,000 years of history, Kathmandu is the cultural center of Nepal and home to seven UNESCO World Heritage Sites. 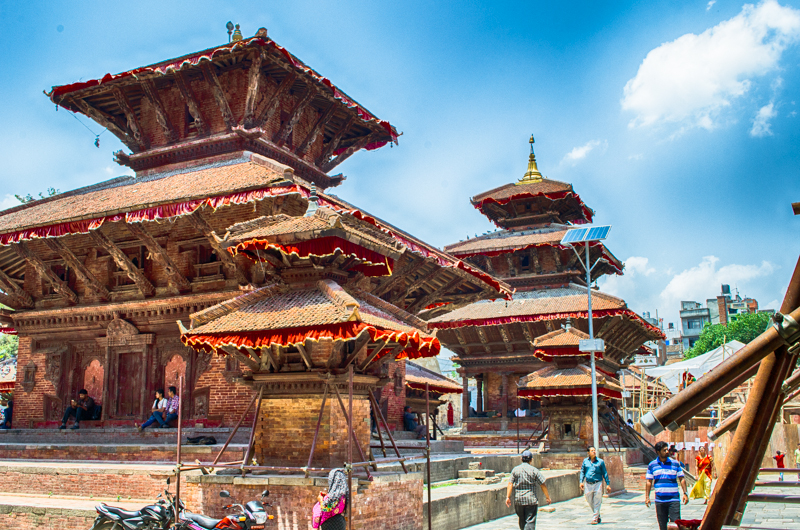 One of three Durbar (Royal Palace) Squares in Kathmandu valley, Hanuman Dhoka held the Palaces of the Malla and Shah Kings who ruled the city. The area was heavily damaged during the 2015 earthquake but visitors can still enter the Palace gardens and see some of the artifacts in the museum. 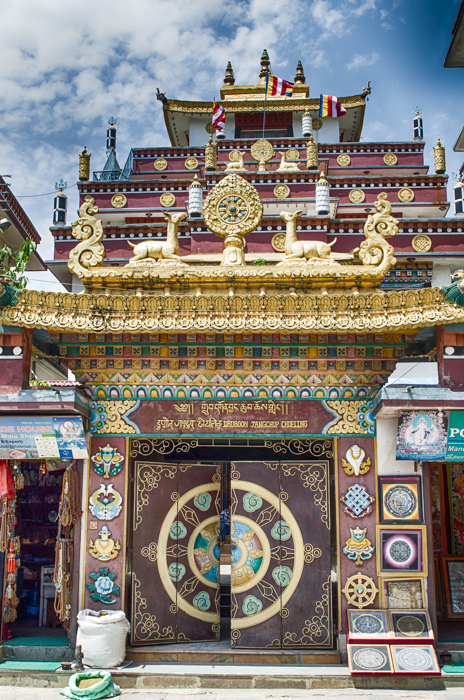 The area outside the Palace hold numerous temples and the Kumari House. The Kumari is considered a living goddess. Revered by both Hindus and Buddhists, the Kumari is a young girl, as young as 3, selected from the Newar Shakya clan by a panel of priests that serve as the Kumari until puberty when a new Kumari is selected. The current Kumari is 4 years old. Living a life of isolation in the home, the Kumari goes out in public for important religious and state events. If you visit the Kumari house you might see her appear at one of the windows for a few minutes but there are no photographs allowed. 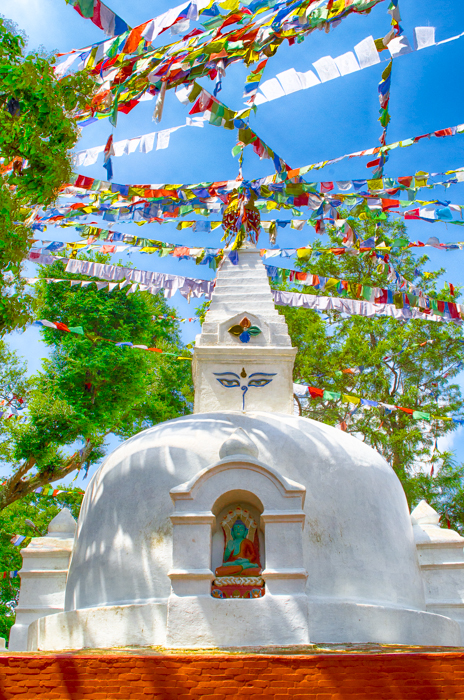 Sitting on a hill in the Northwest portion of Kathmandu valley is one of the holiest Buddhist shrines or stupas in Nepal. Built over 1500 years ago, Swaymbhnath Temple has undergone 15 renovations over the years with the last one taking place in 2010. 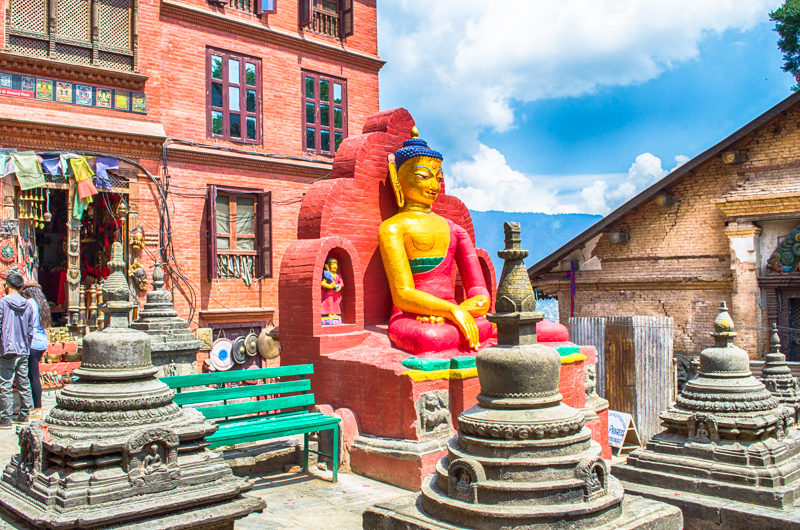 Also known as the Monkey Temple, due to all the monkeys running around, Swaymbhunath Stupa is revered by Buddhists and Hindus alike with many former Hindu monarchs making a pilgrimage to the site. Once you ascend the steps to the top you will be greeted by a large Stupa along with several other religious statues and structures and a breathtaking view Kathmandu Valley.  Unlike some places in Asia where the monkeys tend to steal your belongings and cause general havoc, the ones at Swaymbhunath seem content to just walk around and eat. 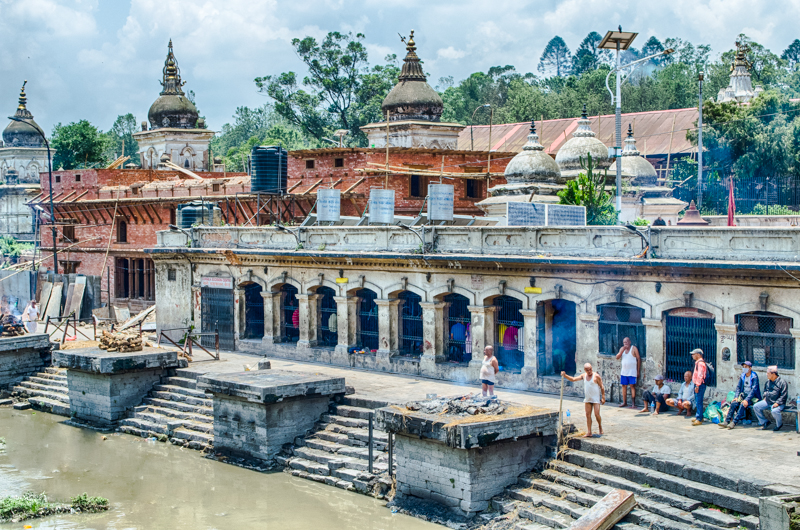 Located on the banks of the Bagmati River, Pashupati is a Hindu Temple and UNESCO World Heritage Site. The oldest Hindu Temple in Kathmandu greets thousands of visitors and religious pilgrims each year. While the temple itself sits on a hill and can only be entered by Hindus it can be seen from the river bank. The complex holds over 500 temples and monuments and covers over 600 acres. One of the most interesting aspects of Pashupati is the daily cremations that occur on the shores of the Bagmati River. Sadhus or Holy Men, are abundant within the complex area and will allow their photos to be taken for a nominal fee. 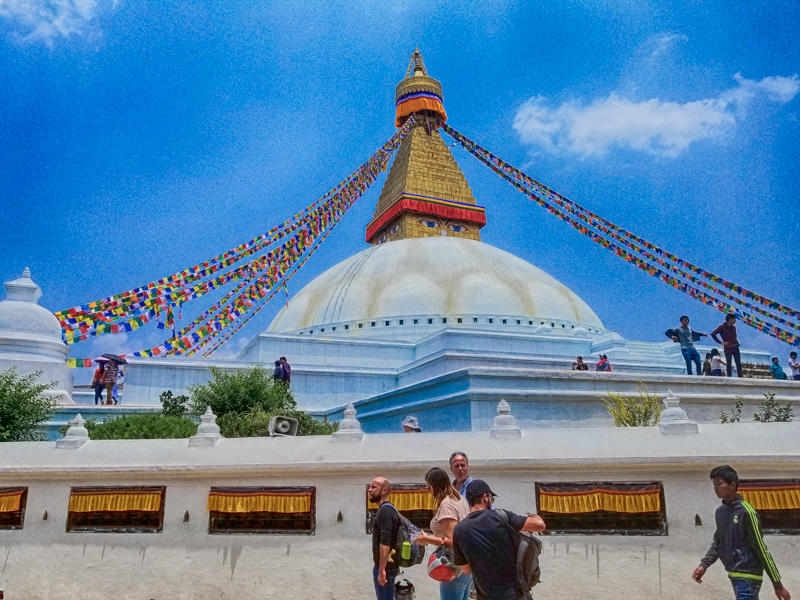 One of the largest Stupas in the world, the Bauddhanath Stupa in the heart of Kathmandu is believed to hold the remains of Kassapa Buddha. The Stupa commands an imposing site overlooking the mountains in the distance and surrounded by shops and restaurants. 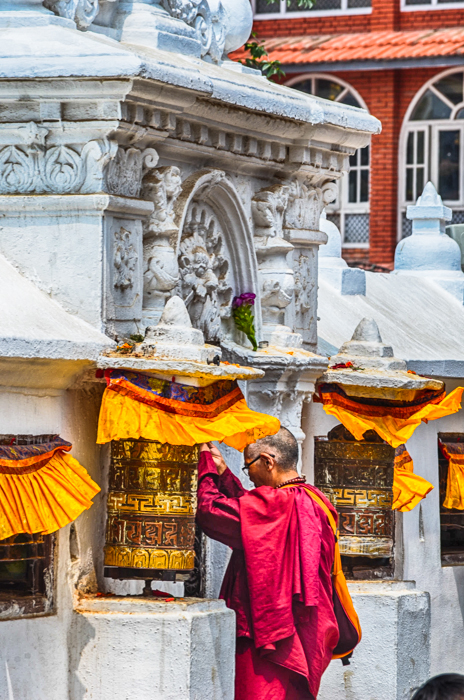 Each day hundreds of religious pilgrims and tourists crowd the area. There are several side streets crowded with shops, homes and monasteries. Visit around mid day where you can walk around the Stupa see all the sights and relax at one of the roof top restaurants where the views are fantastic.

Changu Narayan is located on a hill 12km outside of Kathmandu. Dedicated to the Hindu Lord Visnu, it is the oldest temple in Nepal. Originally built in the 4th century the Temple was rebuilt in 1702 after a major fire. There are several statues dotting the courtyard, some dating back 1500 years. The area is not serviced directly from Kathmandu by any bus service so a few bus transfers or a taxi is needed and there are no real amenities such as restaurants and such nearby. 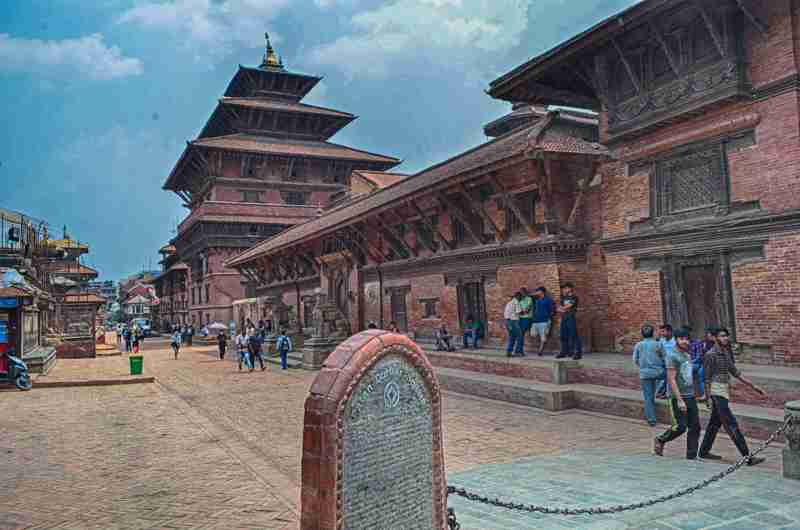 Patan Durbar Square sits in the middle of Lalitpur on the opposite side of the Bagmati River from Kathmandu. The Malla Kings of Lalitpur established the square and Patan is one of the oldest known Buddhist cities. The Palace contains three courtyards and the main Temples are on the western side with their entrances facing the Palace. The Patan Museum is located in one of the structures. Most of the current structures are from the 1600’s, The Temple was built in 1637. Patan was affected during the Nepal earthquake in 2015 with several of the temples and structures damaged but they are currently undergoing repair. Even with some of the structures undergoing repair, Patan Durbar Square is a beautiful location and a magnificent example of Newar architecture. 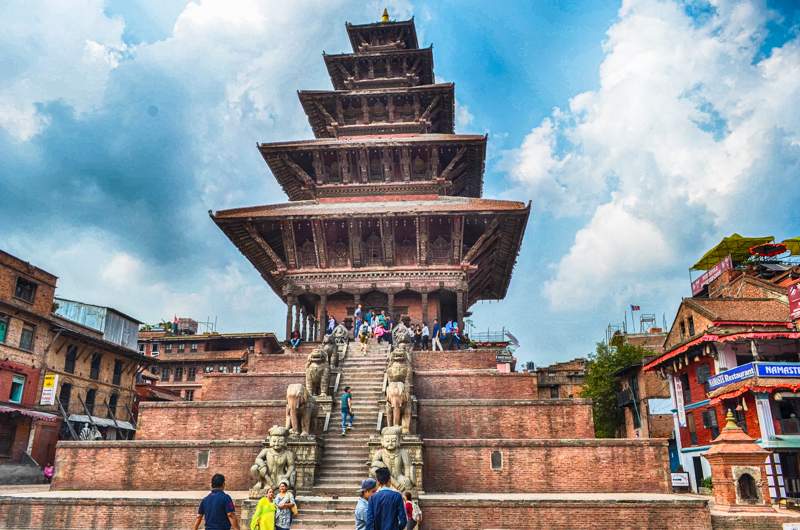 Located around 20km from Kathmandu, Bhaktapur is the third of 3 royal cities. The first being Kathmandu the second Patan. The City of Devotees and Nepal’s Cultural Gem are just a couple of the titles bestowed upon this ancient city. Bhaktapur is full of Monuments, Temples and Palaces with elaborate wood carvings and beautiful courtyards. 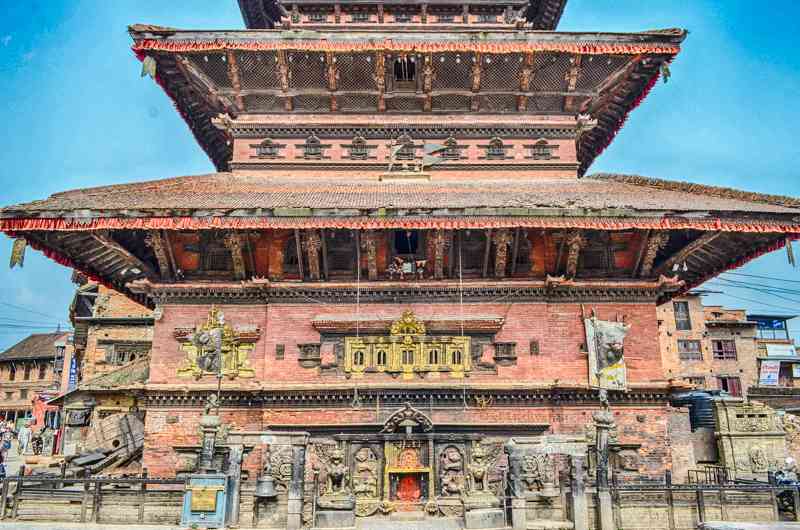 Founded in the 12th century, Bhaktapur was the capitol of the Malla kingdom until the 15th century and then it was an independent kingdom until the 18th century. Bhaktapur has numerous Hindu and Buddhist site and there are nineteen Buddhist Monasteries. There are three squares that house Temples, Shrines and Palaces and a you should set aside at least a half a day to explore everything. 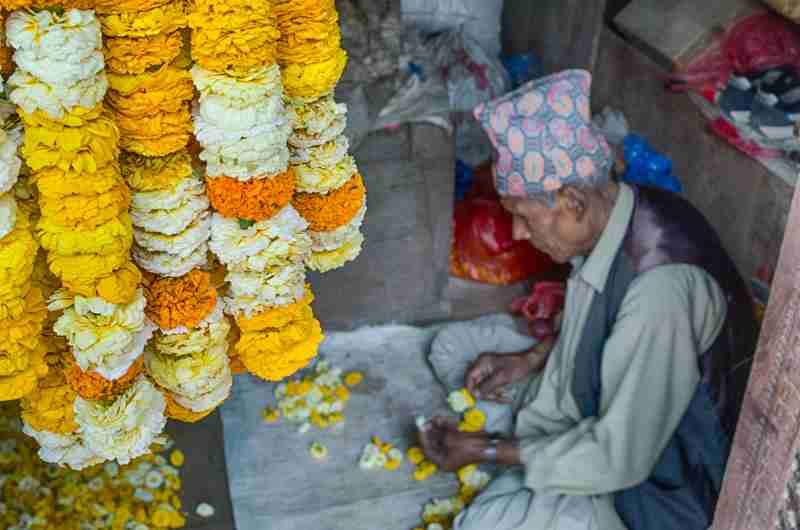 There are several international carriers offering flights to Kathmandu and once there you have a wide variety of Hotels in Kathmandu to choose from. From luxurious accommodations to modest there are hotels to fit any budget. The prices overall for food, transportation and entry in various sites is very reasonable.

If you get the chance you should visit Nepal and plan on spending 3-4 days in Kathmandu so you can take in all the cultural sites. 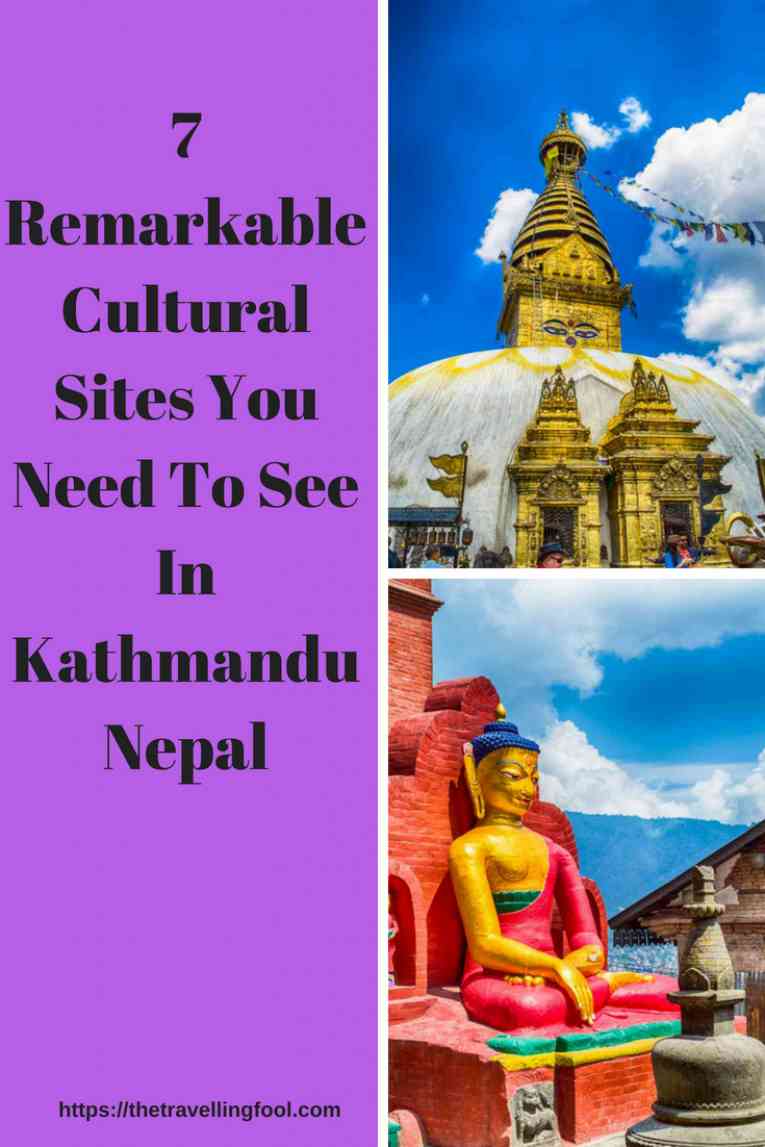