In the late 1800’s the town of Coffeyville Kansas had a population of around 5,000 and was one of the most important towns in Southeastern Kansas with four railroads converging and supporting manufacturing establishments, saw mills and professional offices. By the time I arrived in May of 2016 the town population was a little over 10,000. The modern highway system has by passed the town and what is left is a small country town where most everyone knows each other and life is a little slower than the big city. Coffeyville Ks offers small town charm and a big history.

Turn back the clock to the 1890’s and the area around Arkansas, Oklahoma, Kansas and Missouri was an outlaws haven. Outlaws such as Jesse and Frank James and the Youngers robbed banks and there was no other feared gang in the region than the Dalton Gang.

First a little history lesson. There were five Dalton brothers that were famous or infamous. In fact, there were a total of 15 children in all, two died in infancy, they had a bunch of kids back then with no television and all.

The oldest brother Frank Dalton was a Deputy US Marshall working out of Ft Smith Arkansas for the infamous Judge Parker. Franks three brothers, Grat, Bob and Emmett occasionally rode posse with him while another brother, Bill, ran with the Doolin gang and the Wild Bunch.

Brother Frank was killed in a shootout while attempting to arrest an outlaw and brothers Grat, Bob and Emmett turned to a life of crime after not being paid wages for being lawmen.

In 1891 Bob recruited a couple of other adventure seekers to join him and brother Emmett and later Grat joined in. Over the next couple of years, the gang robbed banks in the Oklahoma territory, hit train stations to steal the baggage, stole a few horses and generally made their mark as the bad boys in the area.

Bob Dalton decided he would become more famous than Jesse James and rob two banks at the same time and set his sights on Coffeyville Kansas where the Condon Bank and the First National Bank were only a few hundred yards apart. While Coffeyville was a growing town at the time, it was still very peaceful and hardly anyone carried a gun, not even the Sheriff.

On the morning of Oct 5, 1892, the three Dalton brothers along with two other outlaws, Bill Powers and Dick Broadwell calmly rode into town, little did they know what await them.

When they attempted to rob the banks, one of the tellers in the Condon Bank lied to the gang by telling them the vault had a time lock and couldn’t be opened for 45 minutes. This gave the townspeople enough time to mobilize and the gunfight began.

When the smoke cleared Grat and Bob Dalton, Dick Broadwell and Bill Power were all killed and Emmett had been shot 23 times to include getting hit by buckshot in his back. Emmet survived and was sentenced to life in prison getting paroled after almost 15 years. Emmett went on to become a successful real estate developer in California, authored a couple of books about the gang and even acted in a few movies.

Today the Condon Bank sits prominently in the town square and is open to visitors with photos and some items of the period. Part of the building is occupied by the Coffeyville Visitors Center and they are more than happy to give you a free tour of the facilities, tell you all about the day that changed their town and point out other interesting sites you can visit.

The remnants of the old jail where the gang was laid out for photos is still standing and you can reach it by walking down a narrow alley known as “Death Alley”.

A few hundred yards from the Condon Bank is the Dalton Gang Museum. The Museum has some of the bank doors, complete with bullet holes, and displays of other important things and people that made Coffeyville Kansas home. You can take a short drive to the Coffeyville cemetery and see the gang’s final resting place.

Coffeyville has had some other notable citizens to include Walter “The Big Train” Johnson, baseball Hall of Famer and was the only player to have 3,000 strikeouts for over 50 years, Phil Ehart, drummer for the rock band Kansas, Johnny Rutherford, professional race car driver and several others.

It is the Coffeyville Raid by the Dalton Gang though that cements this town in history and makes it a great place to visit, spend the day and learn about life in the 1800’s.

Coffeyville Kansas is located on Hwy 169 in Southeast Kansas just across the Oklahoma border. 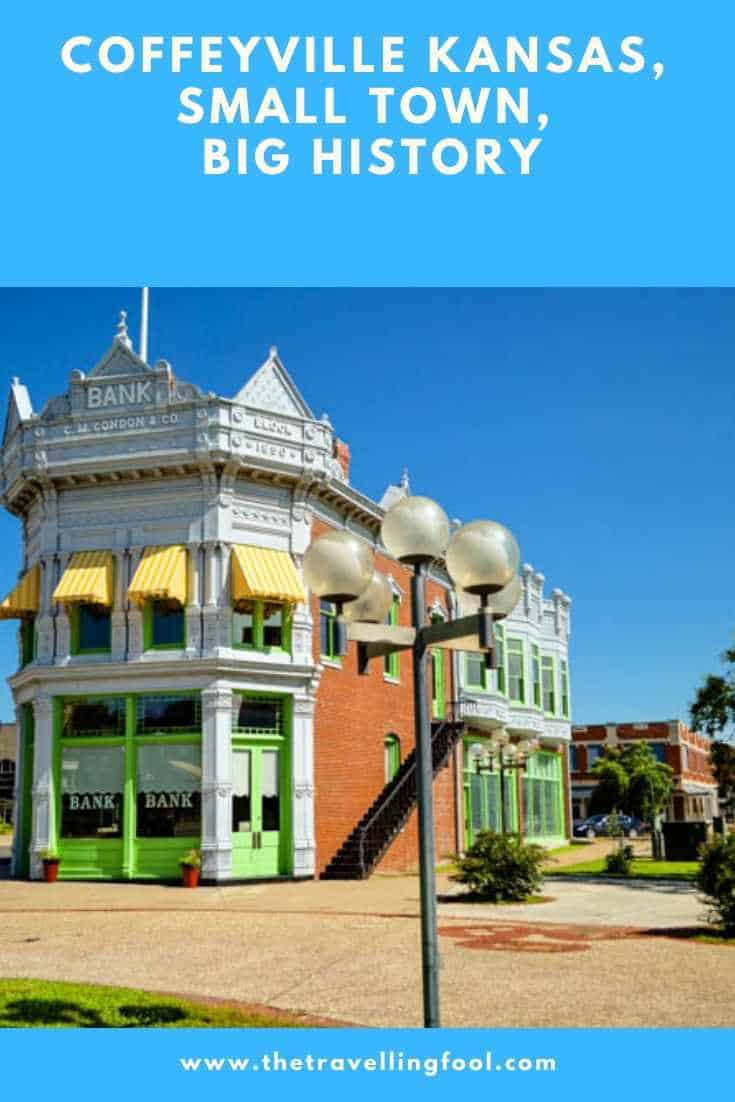