Located on the site of an actual gold mine, the Pine Mountain Gold Museum offers visitors the opportunity to pan for gold and gemstones, has scenic train rides, hiking trails and a fully functional 1858 gold stamping mill along with static displays telling the story of Georgia’s gold mining history.

You have never heard of the Georgia Gold rush? Not many outside of Georgia have. When you think of gold mines, places like California, Alaska or states out West come to mind but gold was first discovered in America in 1799 in North Carolina. Later South Carolina, Virginia and Georgia all produced gold.

The town of Villa Rica, which began as Hixtown and was later renamed Villa Rica meaning Rich Village in Spanish, was part of the Georgia Gold belt. In the mid 1880’s the Georgia Gold belt was one of the richest gold formations ever discovered in America. The gold around Villa Rica is 98% pure making it some of the purest gold in the world. At one point in Villa Rica Georgia, there were 19 operating gold mines.

While the local native population knew of gold and used it in jewelry it was not widely known. Farmers looking to supplement their income would occasionally get gold from small mining operations but since it was illegal to mine on Cherokee land, they would not openly advertise the fact. Later when the Cherokee were pushed out of Georgia, there was a little known law giving the mineral rights to the state. In 1829 the law was repealed and commercial mining operations began springing up.

The gold rush lasted around twenty years until 1849 when gold was discovered in California and the miners headed west. There were a couple of reasons the gold mines around Villa Rica were abandoned. There was more gold in California and it was a lot easier to get to. The gold in Villa Rica is mainly hard rock mining, meaning you have to dig it up and then separate it from the rock. It is expensive and time consuming to get the gold out of the ground.

By 1900 most of the gold mines in the area were abandoned, plowed under and the land used to grow cotton. The Pine Mountain Gold mine was the only commercial mine after 1900. Most of the gold mines in the US ceased operations at the start of WW2 and a lot of the equipment was scraped and used for the war effort. Wes Berninger, Pine Mountain Gold Museum Manager states, “T. H. Aldridge Germany was (and still is for that matter) the largest exporter of industrial chemicals.  Since the mines at that time were based upon the cyanide process when Germany became a combatant, imports of industrial chemicals to the United States came to a sudden and screeching halt.  Basically, World War ended any real opportunity for massive commercial mining on the site.  The gold is too fine to be extracted by anything other than chemical processes.”

Throughout the years some gold was recovered by hobby miners and a few were more serious but there was never really any more commercial mining after WW2.

The museum today has a 50 seat theater that documents the history of the Villa Rica gold mines and the natural history of gold in Georgia, a 4,800 sq foot museum displaying artifacts from the gold rush period and efforts of the miners in Georgia along with train rides through the park and hiking trails. Throughout the park visitors can see some of the ruins of past mines and gold retrieving equipment and also take a shot at panning for your own Georgia gold.

The Museum, under the leadership of Wes Berninger, also began raising bees and harvesting the honey. Wes wanted to help the environment and give something back to the community so the bee hives, located on a hill behind the museum, help local crops. The honey is sold at the museum and Wes has also partnered with some local businesses to use the honey in their products.

The town of Villa Rica celebrates the gold rush history every year in September with the Villa Rica Gold Rush Festival. Held in downtown Villa Rica there are vendors, a 5k run, parade and entertainment throughout the day.

The Pine Mountain Gold Museum does a really good job in retelling the history of the Georgia gold rush. The museum staff is constantly looking to add to the exhibits and rotate the items in the museum so returning visitors can experience and see new things.

The Pine Mountain Gold Museum is located at 1881 Stockmar Rd, Villa Rica Georgia and is open from 10am to 4pm Tuesday thru Saturday. 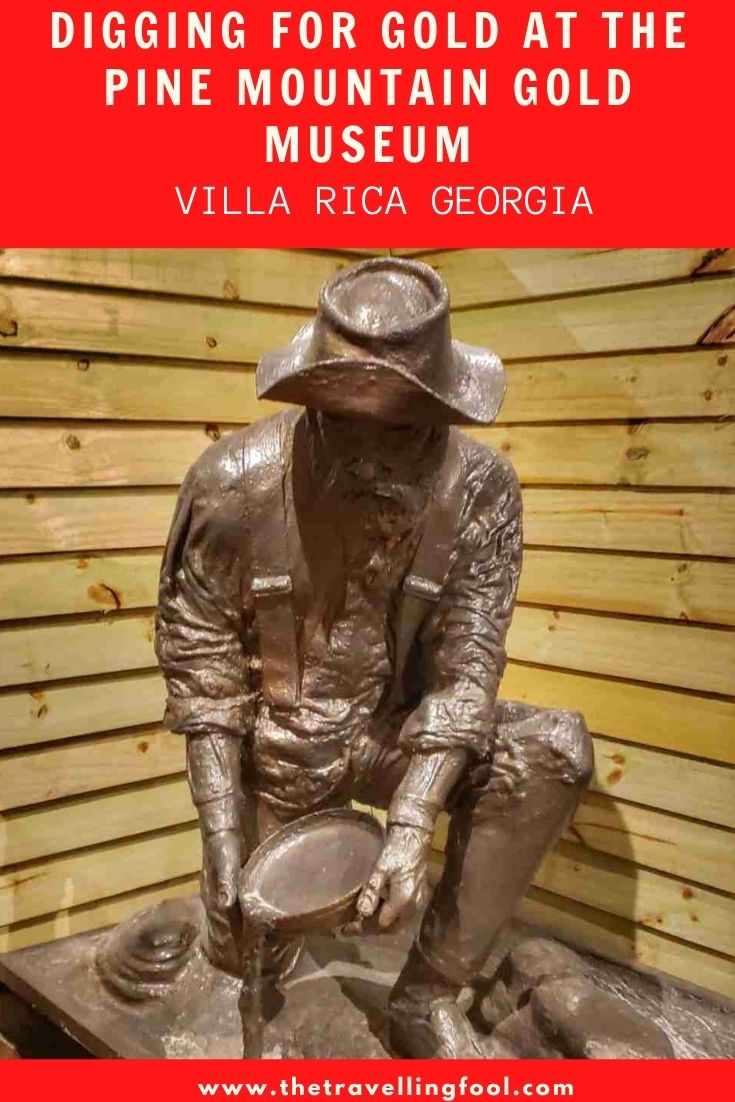