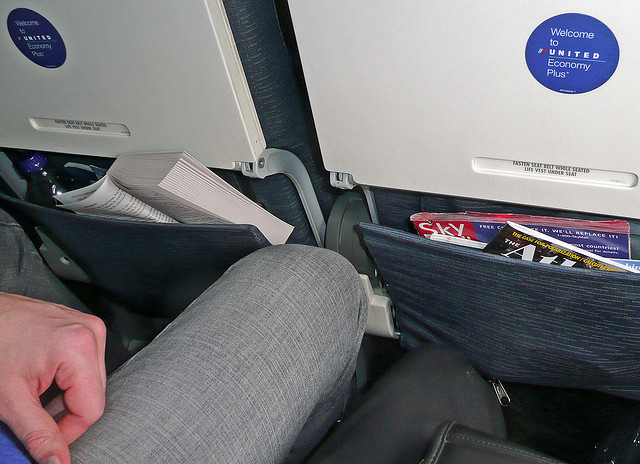 A United flight made news a few months ago when it had to be diverted in order to kick off two passengers. Seems they got into a disagreement about reclining airline seats.

One passenger took it upon himself to install the “knee defender” on the seat in front of him. For those that haven’t heard, the knee defender is a little tool that stops the seat in front of you from reclining. Well naturally the one reclining the seat didn’t appreciate that and that’s where it began.
I really don’t understand the mentality of someone that thinks they can prohibit me from reclining in a seat that I paid money for. I have heard all the whiners that it’s rude to recline, I’m invading your space and so on. I don’t care. I paid money for this seat and I refuse to be cramped in when I can recline a get a little comfort.

You don’t like it? I don’t care. Besides what gives you the right to install some gimmick that prohibits me from operating my seat in the manner intended? Who the hell put you in charge of what passengers can and cannot do? If I wasn’t supposed to recline my seat then they would not have made it so I could.
On the other hand I woke up early and got to the airport 3 hours in advance to put up with idiots searching me and telling me my fingernail clippers are not allowed because they are a weapon. Who am I James Bond?

Give me finger nail clippers, thread and a piece of bubble gum and I can make a weapon of mass destruction. I finally get on the flight, cram my butt into the child seat and the moron in front jams his seat back smashing my knees.

With him reclining his seat I am within 6 inches of him for the next 8 hours. I spent good money for this seat and I don’t feel like sharing it with the idiot sitting in front of me. The least I can do is jam my knee into the back of the seat and hopefully keep him as uncomfortable as possible of the next few hours.
According to most reports, the Knee Defender device is banned for use on all major US Carriers, in addition Quantas and Virgin have also banned the device. All that means is if someone is caught using it they will be told to remove it. Some airlines such as Spirit and Allegiant have removed the reclining mechanisms stopping their seats from reclining at all.
Personally I blame the airlines. The cattle car mentality of stick as many people as possible into a space. The airlines are one of the only businesses that don’t give a damn about their customers and don’t have to. You either fly or not, they don’t care. There are enough people that fly that their business won’t go away.

You want to fly from Kansas City to London? You have limited choices. You go at this time on this airline or don’t go. There is no incentive to try and get market share, satisfy the customers or improve service. I can imagine an engineer planning out double decker seating to get more people per square meter in the plane. “It’s like bunk beds for airline seats. You liked bunk beds as a kid. Come on it will be fun”.
Is it any wonder people fight over reclining seats when they are inches apart?

So where do you fall in this debate? Are you a recliner or not? Have you ever got into a dispute because of it?