I was recently invited to visit Fayetteville North Carolina and my trip was hosted by the Fayetteville CVB. This is one of the places I visited.

Fayetteville North Carolina is home to Ft Bragg, the world’s largest military base by population. The US Army’s Airborne School, 82nd Airborne Division, Special Operations Command, and other military units call Ft Bragg home. Fayetteville is also home to The Airborne and Special Operations Museum. I love visiting Military Museums, you can learn a lot about what previous generations have done in the service of their country. 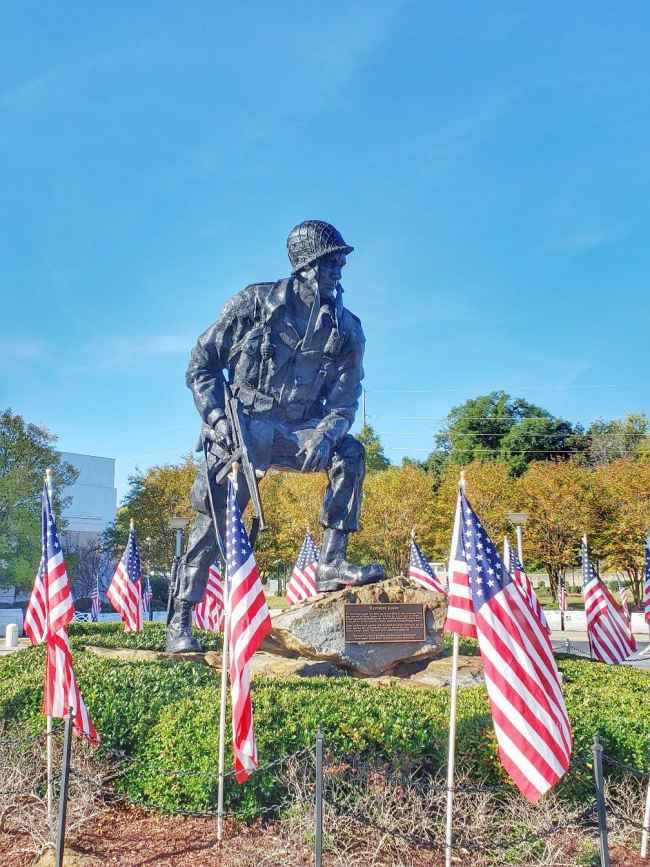 The Airborne and Special Operations Museum is part of the US Army museum system but you don’t have to go on Ft Bragg in order to visit. The museum is hard to miss, sitting prominently on Ft Bragg Blvd and Hays St, the main downtown street.

The first thing you will notice driving up to the museum is the statue of “Iron Mike”. Ft Bragg is home to the 82nd Airborne Division and the Airborne Corps. Iron Mike represents all paratroopers past and present. The 16 ft tall statue wasn’t named for any particular person. In fact, the term Iron Mike was used to describe military men who were brave, tough and inspiring. There are actually several statues named Iron Mike. One is in Quantico, depicting a Marine with a rifle, one in Belleau France at the American Military Cemetery. Another in Parris Island Marine Corps Base and a few others. The Iron Mike statue honoring paratroopers was sculpted in 1960 using Sergeant Major James Runyon as a model. Several dignitaries were present at the dedication but in 2005 a bronze version was cast and the original, which was made of polyester strips dipped in epoxy and stretched over a steel frame, was replaced. The original was refurbished and now dominates the entrance to the Airborne and Special Forces Museum while the bronze statue sits on Ft Bragg.

Once you enter the museum you are greeted with two life-size replicas of paratroopers coming in for a landing. 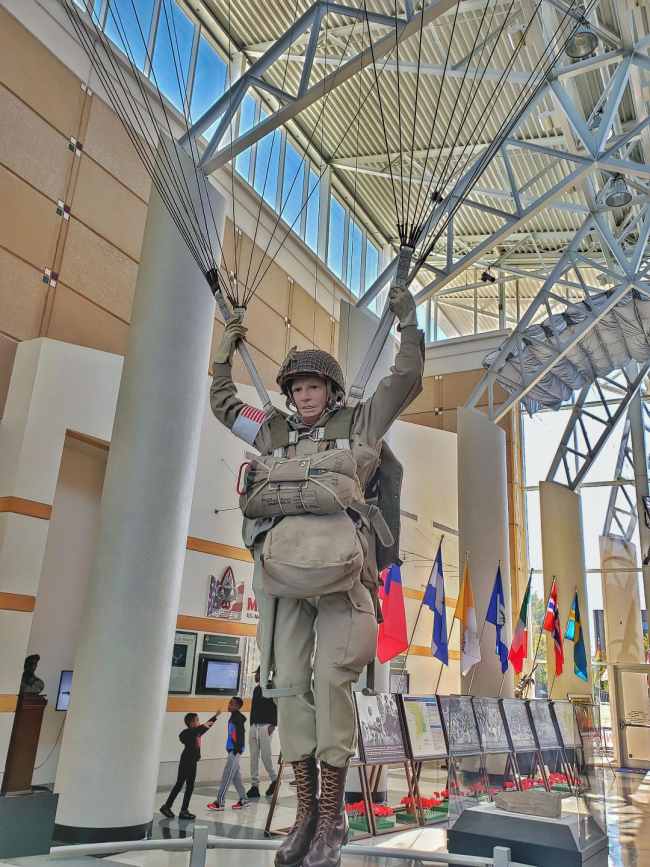 The museum has a theater, two simulators where visitors can get the sound and feel of what people in the military are trained to do, a gift shop and temporary exhibits that rotate. Just to the right of the main exhibit entrance, on the wall, lists the names of those who have been awarded the nation’s highest honor, The Congressional Medal of Honor. 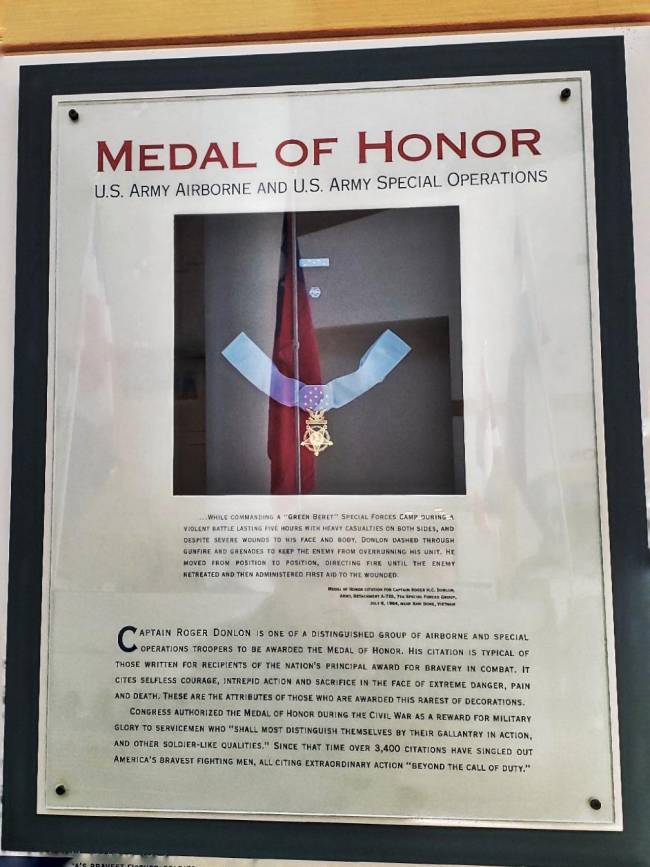 Entering the main exhibit hall, you begin to hear the sounds of war and step into a guided history of the Airborne and Special Operations throughout the many conflicts over the years. With life-size mannequins depicting paratroopers and special operations peeking out at you from around the corner, the museum walks you through the history and tells the story from conception of the airborne to today’s modern warrior. 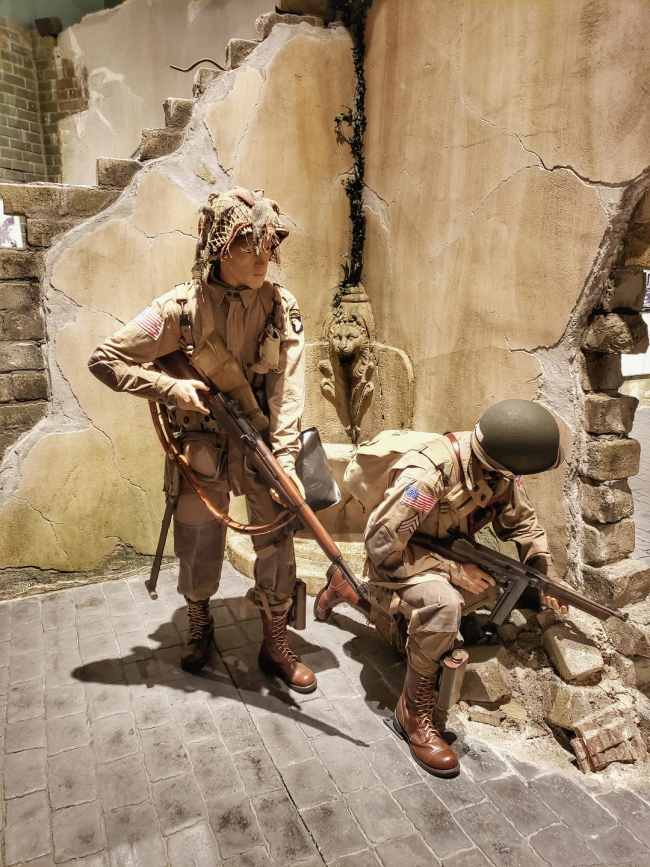 From the early 1940’s and the conception of the US Army Parachute Test Platoon and ending with today’s modern airborne and special operations soldier, the museum does a great job of telling the story and history of the evolvement of airborne capabilities. 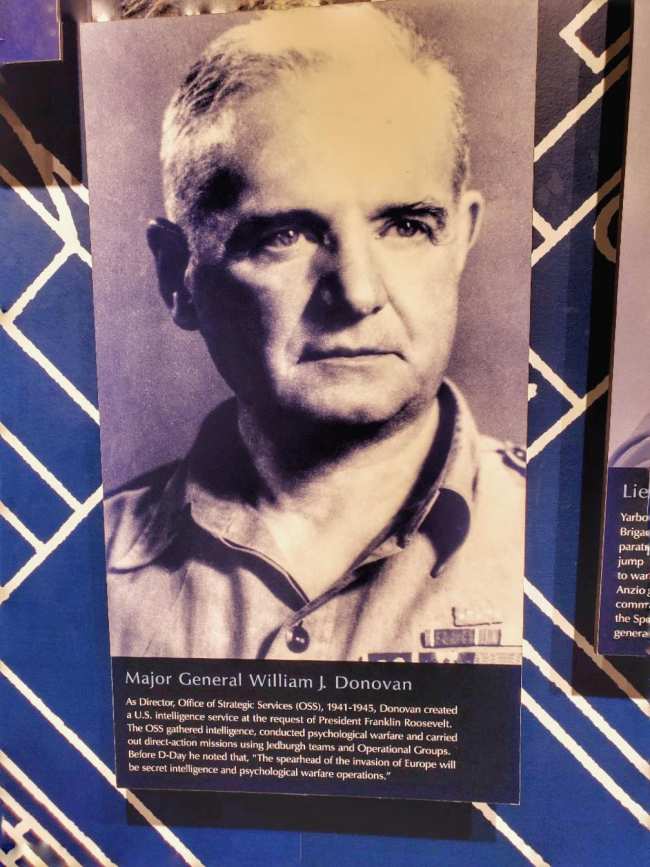 The museum also highlights important people in the history of the airborne and special operations. People like William J. (Wild Bill) Donovan. Donovan is the only person to win all four of the nation’s highest honors. The Congressional Medal of Honor, The Distinguished Service Cross, The Distinguished Service Medal, and The National Security Medal. Donovan was named as the Coordinator of Information by President Roosevelt in 1942. That turned into the OSS the precursor to today’s Central Intelligence Agency. 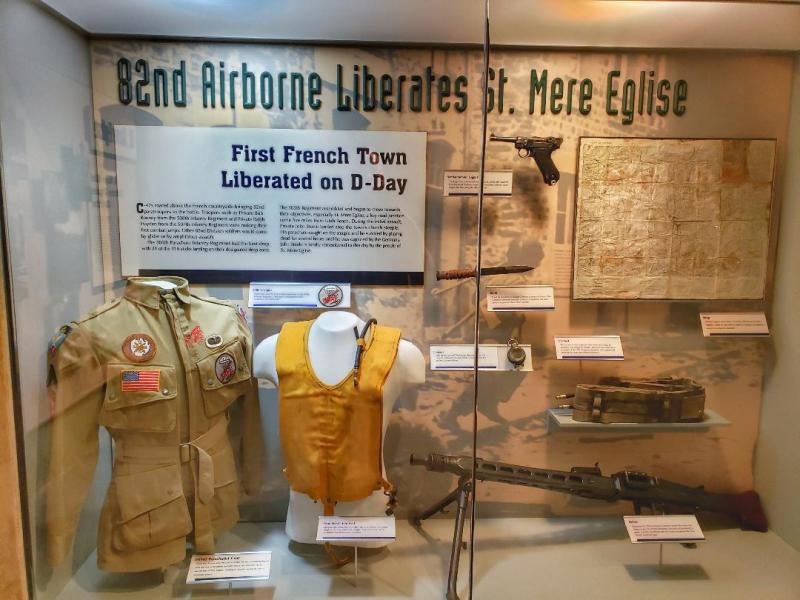 You can read about Sainte-Mere-Eglise, the first French town liberated by the allies in WW2. On the nights of the 5th and 6th of June 1944, 30 paratroopers missed their drop zone and landed in the middle of town and among heavy German resistance. Reinforcements arrived on 7 June and the town was liberated. One paratrooper, John Steele of the 82nd Airborne, landed on top of the church and was stuck. While trying to cut himself down he dropped his weapon as the fighting raged below him. He decided to play dead and hung there until a German soldier cut him down. They gave him medical care and made him a POW. He escaped three days later made his way back to the Allies and later participated in the liberation of the Netherlands and the Battle of the Bulge. Sainte-MereEglise even has its own Airborne Museum to honor those who fought. 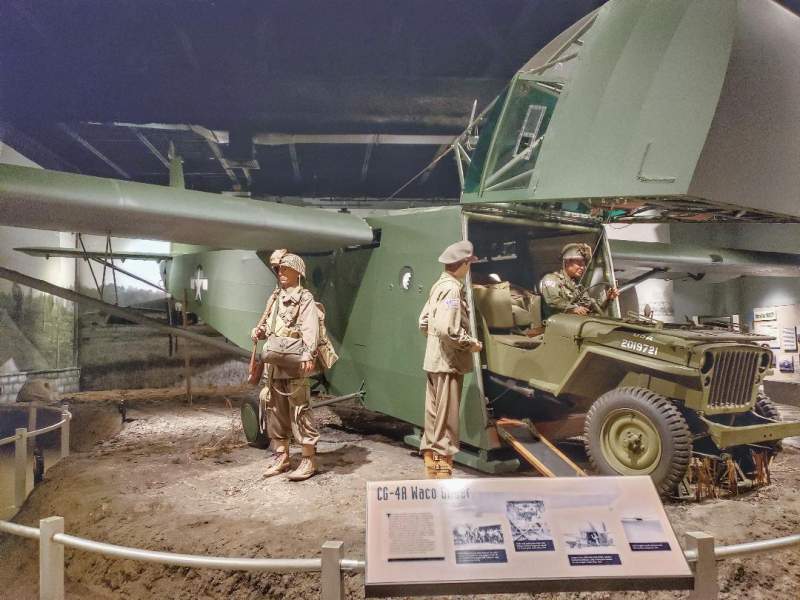 You can see just how small and crowded those Gliders and Airplanes were during WW2 and the D-Day invasion. 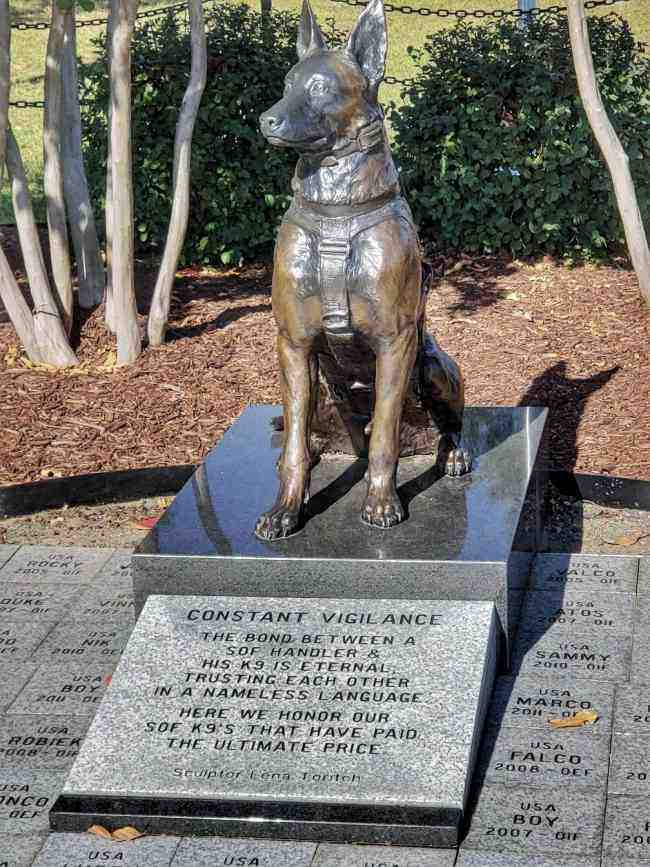 Once you are finished touring the museum head outside to see the K-9 Memorial. Dedicated in 2013, the memorial honors fallen Special Forces K9’s killed in action. The memorial is located next to Iron Mike. 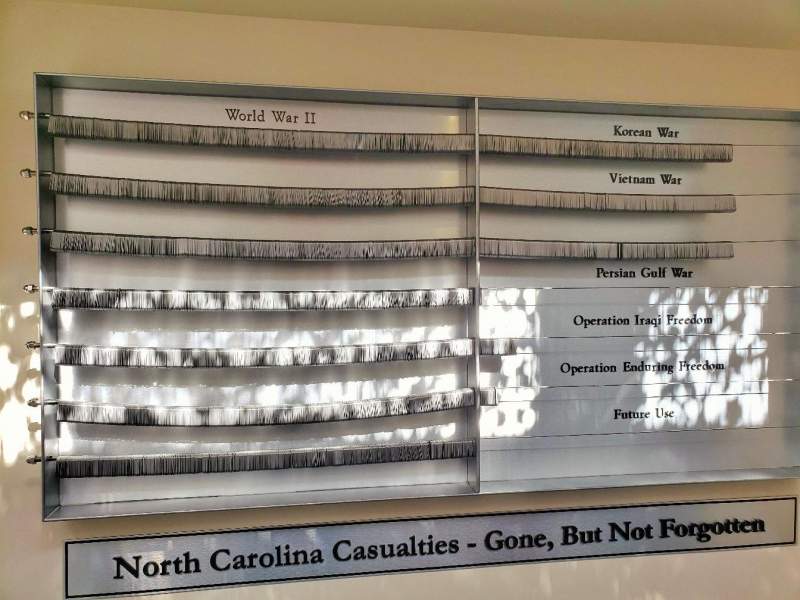 Across the parade ground from the Airborne and Special Operations Museum is the North Carolina Veterans Park, which honors the contributions of North Carolina Veterans from all branches of service. There is a garden, a plaza containing 50 columns with the names of all the counties in the State adorned with castings of the hands of veterans and their families. Inside the 3500 sq ft reception center there is a case hanging on the wall displaying “dog tags” of each North Carolina citizen who died while serving in the military since WW2.

We honor our military with Military Cemeteries but military museums are sometimes misunderstood. They don’t aim to glorify war or make political statements. Military museums tell the history and stories of the men and women who served. They tell the stories of people who, during a time most would cower, found the courage to do something heroic. The Airborne and Special Operations Museum along with the North Carolina Veterans Park pay honor and tell the stories and history of the very best our nation has. North Carolina is proud to call itself the “Most Military Friendly” state and Fayetteville N.C. is one of the most patriotic cities you will ever visit.

The Airborne and Special Operations Museum is located at 100 Bragg Blvd. Fayetteville, N.C. 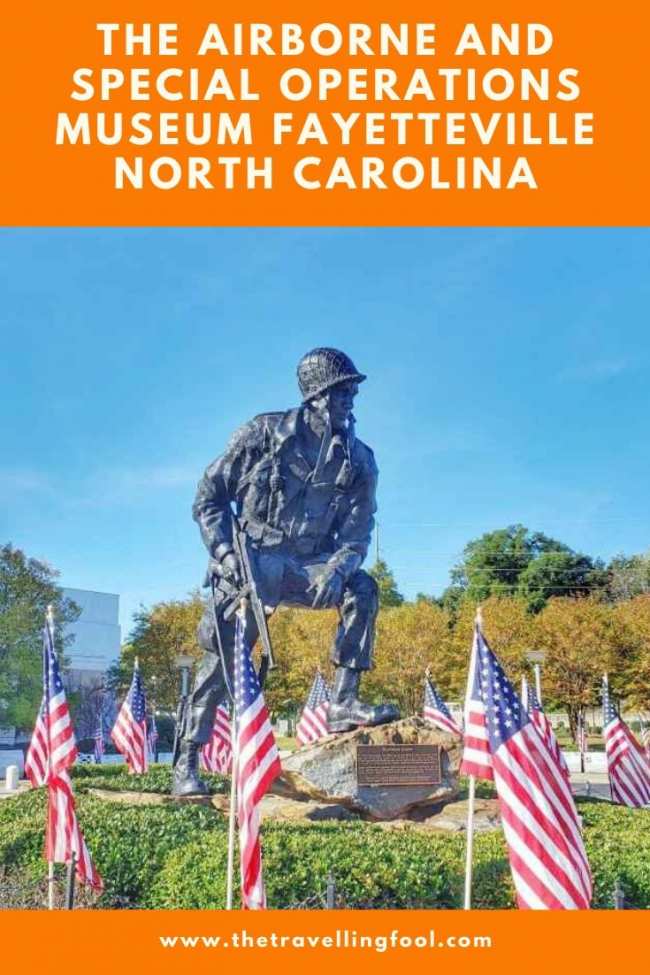 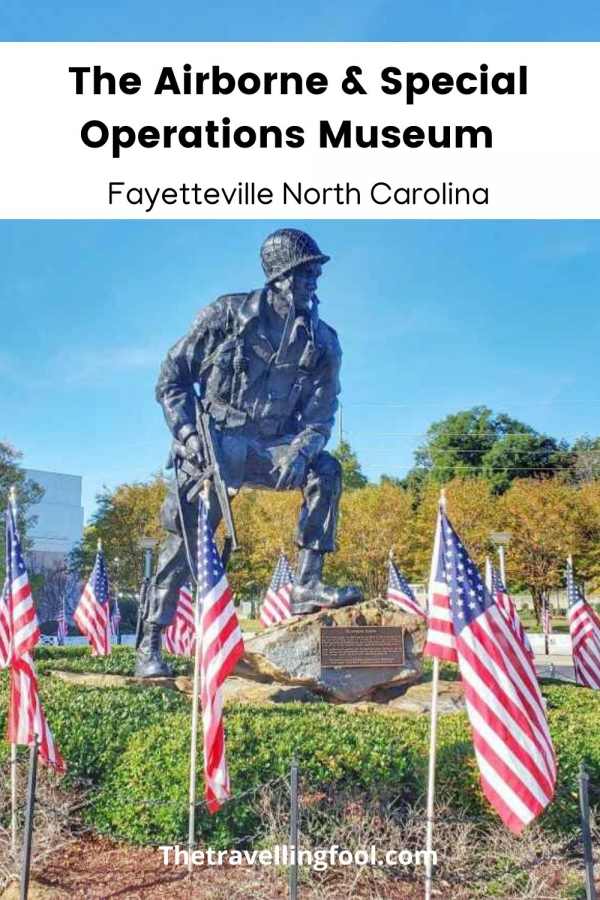