Home » The Best Things To Do In St Simons Island Ga

I recently spent a couple of days in St Simons as a guest of The King and Prince Resort. Some of the links in this article are affiliate links.

St Simons Island is a popular destination for those looking to get away and enjoy great beaches, historic sites, fishing, golf, fantastic dining and accommodations. Listed are some of the best things to do on St Simons Island Georgia.

St Simons is located about 85 miles South of Savannah Georgia and is the largest island comprising Georgia’s famous Golden Isles. Others include, Sea Island, Jekyll Island, Little St. Simons Island. St Simons is only 18 sq miles in size but gets around 1.5 million visitors per year and with good reason. There is a lot to do on this small island.

Looking for a Hotel on St Simons?

Take a trolley tour of the island with Lighthouse Trolley and learn about some of the historic sites from local guides. The trolley will stop a couple of times on the trip but it will give you a good idea on the island history.

World War II Home Front Museum is located at the old Coast Guard Station and tells the history of St Simons Island during WW2 including the infamous U Boat attack that sank two ships off the coast and the contributions to the war effort by those that guarded the home front.

Pier Village is on the south end of the island and is a shopping and dining destination with popular restaurants, boutique shops, bakeries and sweet shops. Neptune Park and the St Simons Lighthouse Museum are a short walk away.

Neptune Park is located at the end of Pier Village. There is a playground, miniature golf, fishing pier and lots of benches and seating under oak trees. Neptune Park is name after Neptune Small a former slave with an interesting history. A plaque in the park honors Neptune’s legacy.

The current lighthouse was built in 1870 after the first one was destroyed during the Civil War. In 1971 the lighthouse ownership was transferred to Glynn County. In 2004 the Coastal Georgia Historical Society acquired the lighthouse and maintains it as a museum. The lighthouse is still operational and the light is maintained by the Coast Guard Auxiliary. The light casts a beam up to 23 miles out to sea. The St Simons Lighthouse Museum has interactive exhibits and artifacts that tell the history of St. Simons Island and the life of a lighthouse keeper.

Christ Church was built in 1884 but began as a mission in 1736 when James Oglethorpe, founder of the Province of Georgia established the town and Fort Frederica on the island of St Simons. The original church building, built in 1820 was destroyed during the Civil War. In 1884, Anson Greene Phelps Dodge Jr., who reorganized the parish, had the church rebuilt on the site of the previous building as a memorial to his wife who is buried at the cemetery on the grounds. The cemetery also has graves dating back to 1803 and many early political leaders and Georgia settlers are buried there along with Eugenia Price, famed writer of historical novels.

Fort Frederica was established in 1736 by General James Oglethorpe to defend the colony against attacks from the Spanish, who were in present day Florida. The site on St Simons would become the military headquarters for the new colony. The fort was named after the Prince of Wales, Frederick Lewis. With a fort already having the name Frederick it was given the name Frederica. The forts outer walls would encompass the entire forty-acre area and protect the colony until 1748 when a military presence was no longer needed to protect the area from the Spanish. Today the area is open to the public and is operated by the National Park Service.

The A.W. Jones Heritage Center is located at Neptune Park and operates as the headquarters of the Coastal Georgia Historical Society. The center has exhibits on local history, a museum store for gifts and also sell tickets for the Lighthouse Museum and the World War 2 Home Front Museum. You can also pick up a map for where the Tree Spirits are located on the island.

Locate the Tree Spirits on St Simons. Starting with a few tools in his backyard in 1982, local artist Keith Jennings began carving faces into the trees of St Simons. Known as Tree Spirits, the carvings are located around the island and new ones occasionally pop up. A few are on private land but most are on public property and depict faces, mermaids and mythology. Each carving is unique and took anywhere from two to four days to complete.

Play a round of golf

There is some great golfing on St Simons and people come from all over to play the courses. Some are strictly private but there are public courses.

Open to the public this 18 hole course was originally designed by George Cobb and was renovated in 2019.

The King and Prince Golf Course

Open to the public, the course is operated by the King and Prince Resort, the island’s premier beach front resort. The course was designed by Joe Lee, famed course architect who designed more than 100 courses. I had an opportunity to visit the King and Prince course and it is beautifully designed. The course has been ranked as the #1 golf experience in Georgia by Golf Advisor and TripAdvisor gave the course a Certificate of excellence award.

There are a lot of really great restaurants on St Simons but you can’t go wrong with these.

The Georgia Sea Grill opened in 1997 and has consistently been a favorite among locals and visitors. With the fresh locally-sourced seafood, beef, pork, lamb and poultry it is no wonder that this place is ranked #1 on TripAdvisor for St Simons restaurants.

Gnat’s Landing is located in Redfern Village, a shopping district with boutique and specialty shops and restaurants. Labeled as flip flop friendly, Gnat’s is a fun place to grab some plain old good food. They serve sandwiches, salads, burgers and seafood baskets. They also have a full bar. You have to try the fried pickles.

Barbara Jeans is located in Pier Village. The family owned and run restaurant specializes in seafood and home style southern cooking. Known for their crab cakes, they serve up really good meals and the portions are just plain huge. Featured in several magazines, Barbara Jean’s is must for when you visit the island.

The Echo is located at the King and Prince Beach resort on St Simons. Named after the radar facilities that were stationed at the hotel during WW2, The Echo is the only beach front restaurant on the island. You can dine inside or outside but both give you a great view of the beach. The food at the The Echo is classic coastal cuisine and they serve up some killer hand crafted cocktails. They are open for breakfast, lunch and dinner and you definitely need to have at least one meal here.

Okay, not necessarily a restaurant, but located right in the middle of Pier Village, St Simons Sweets is a magnet for those with a sweet tooth or looking for a cold ice cream on a hot day. Owner Sharon Clark opened up St Simons Sweets using family recipes and the shop is full of homemade ice cream, divinity, cookies and hand-crafted treats of all kinds. The pecan ice cream I had was delicious and hit the spot on a hot day.

St Simons is a fun place to spend a weekend and there is a lot to do no matter what your interests. I will tell you that spending a weekend will just make you want to return and experience even more of the island. 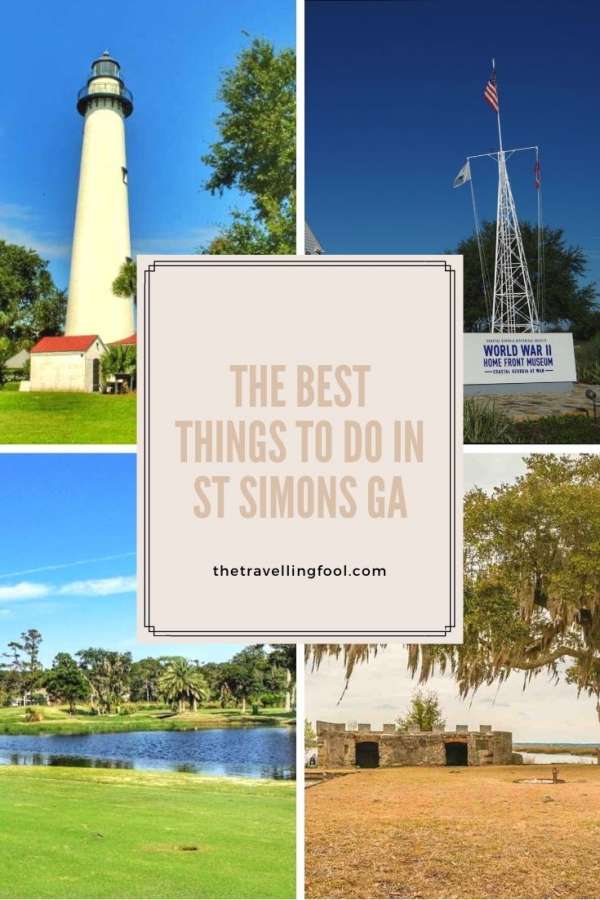