Home » A Visit To The Little Bighorn National Monument 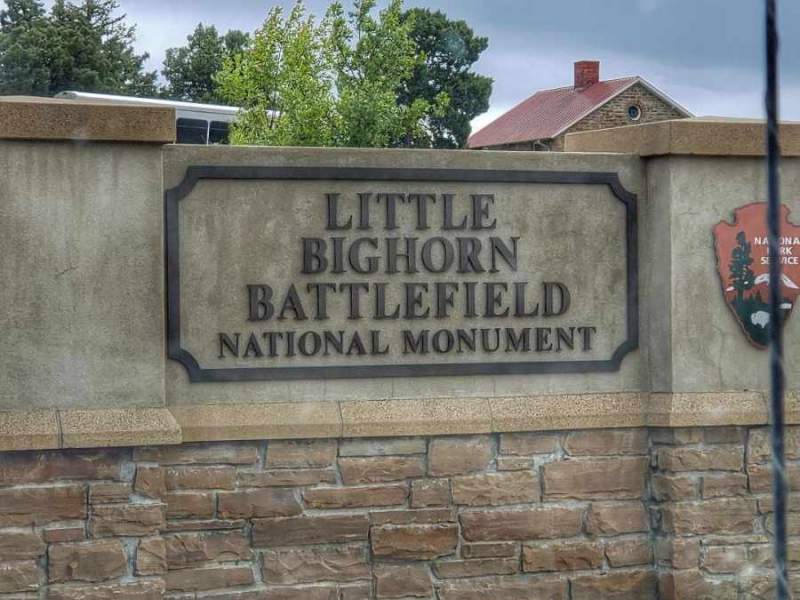 Sixty-two miles East of Billings Montana is The Little Bighorn National Monument, the site of one of the most studied and written about battles in history. On June 25-26 1876, 31 Officers, 566 enlisted men, 35 Indian scouts from the Crow and Arikaras nation and a few dozen civilians from the 7th Cavalry under the command of Colonel George Armstrong Custer engaged in battle with approximately 7,000 warriors from the Lakota Sioux, Northern Cheyenne and Arapaho Nations. Custer was a Colonel at the time of the battle but his men affectionately called him General since he had attained the rank of Brevet Major General at the age of 23, during the Civil War.

Known as Last Stand Hill, the area consisting of rolling hills and grassy valleys is still on the Crow reservation and a place where people from all over the world come to visit and learn about what happened during those two days. 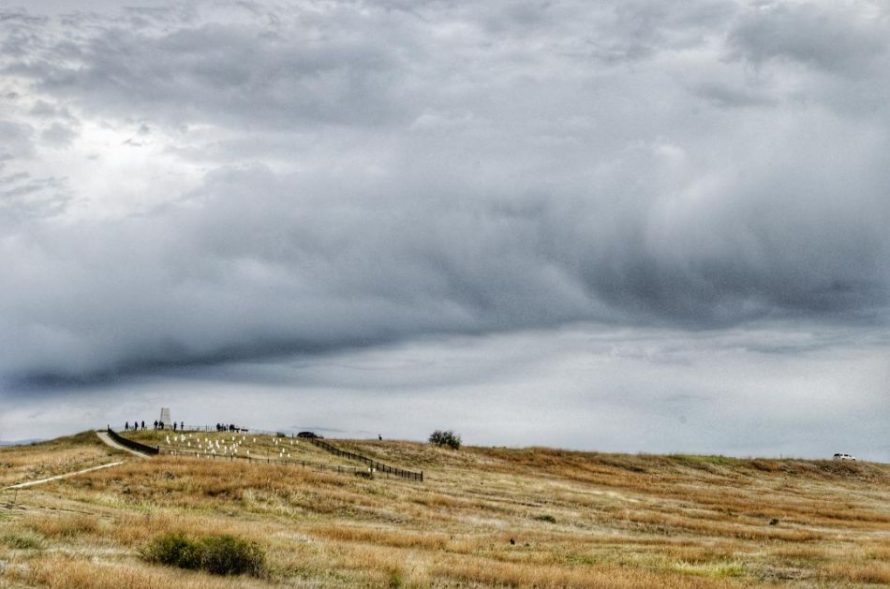 A lot of people have heard about the battle, some learned about it in school, some read about it in books but many don’t know what really happened or what led up to the famous battle. Many people think that Custer ran off to Indian lands to kill off the Sioux or had some type of fantasy about glory and fame. If you ever visit the battlefield the rangers that provide tours of the site are extremely knowledgeable about the battle and I saw many come away saying they never knew all the things that transpired.

To understand what happened you need to know what happened first. The Sioux Nation had resisted the US government efforts to confine them to reservations however they had a reservation in South Dakota. In 1875 gold was discovered in South Dakota and miners began moving onto Sioux reservation lands in hopes of striking it rich. The Army at the time sided with the miners and ignored the previous treaty and invaded the lands as well. This led to already mounting tensions and prompted the Sioux, led by Sitting Bull and Crazy Horse along with warriors from the Northern Cheyenne and a small contingent of Arapaho to leave the reservation and return to their former nomadic life on the plains. 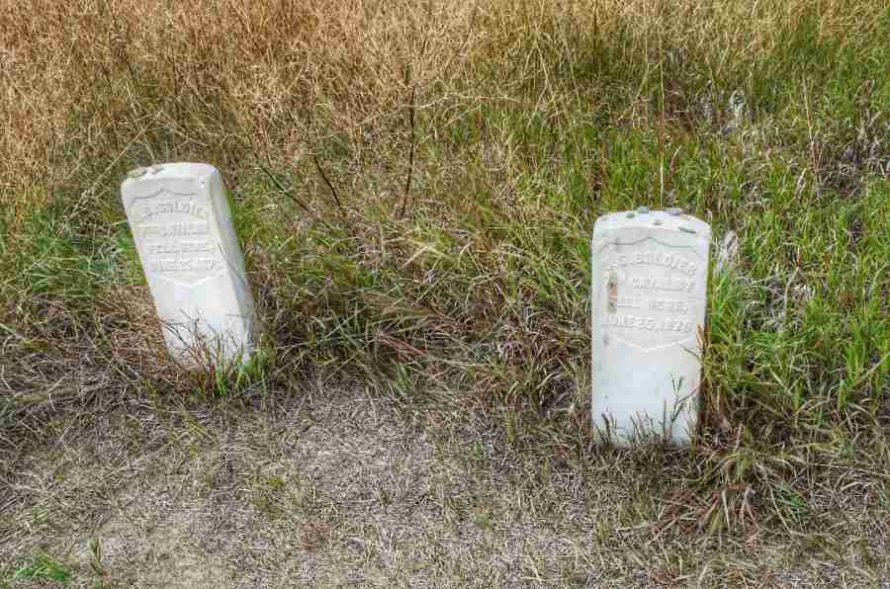 General Phillip Sheridan, the commander of the military division of the Missouri ordered several thousand troops to find and drive the Sioux back to their reservation. That force consisted of 450 men under the command of Colonel John Gibbon out of Fort Bozeman Montana, 1,000 Cavalry and infantry under the command of General George Crook from Fort Fetterman in Wyoming and General Alfred Terry from Fort Abraham Lincoln in Bismarck (Dakota Territory) of which the 7th Cavalry made up the bulk of his force.

Taking different routes and with the intention of driving the Sioux back to their reservation they never intended to form one large unit and engage in battle.

Meanwhile the Sioux, Northern Cheyenne and Arapaho headed west towards the Crow reservation where there was plentiful hunting, water and resources to sustain their ever growing contingent. The Crow who were on friendly terms with the US Government and had historically been at odds with the Sioux did not like the fact that the Sioux were encroaching onto their lands and pleaded with the US government for assistance.

Just a week prior to the battle of Little Big Horn the Sioux had engaged US forces under the Command of General Crook at the Battle of The Rosebud,  east of the area and had fled towards the Little Bighorn area. On June 22 General Terry had ordered Custer to detach the 7th Cavalry and act as a flanking force to keep the Sioux from scattering and slipping away again. On June 24 Custer made camp about 25 miles from the fateful battlefield and he ordered his Crow and Arikara Scouts to move ahead and get information about the Sioux encampment.

On 25 June Custer moved his men to the Wolf Mountains about 12 miles from the encampment to allow time for his scouts to find the encampment and report back. His scouts reported back that the Sioux had discovered his position and having lost the element of surprise and fearing the Sioux would again scatter ordered an immediate engagement of the camp.

What happened next has been written about, studied in military colleges, talked about by elders of the Indian nations and chronicled in print for over 140 years. The result was soldiers of Seventh Cavalry lost 16 officers, 242 troopers, and 10 scouts. Among the dead were Custer, everyone in the five-company battalion under his immediate command, and 18 men who fought in the southern part of the battlefield at the Reno-Benteen Battlefield. Sioux losses were hard to determine and estimates range from 36 to 130. Not all of the 7th Cavalry died at the battle. After the battle was over 262 were dead, 68 were wounded and six later died of their wounds. Custer’s Battalion – C, E, F, I and L companies – were wiped out, but the majority of the seven other companies under Major Marcus Reno and Captain Frederick Benteen survived. 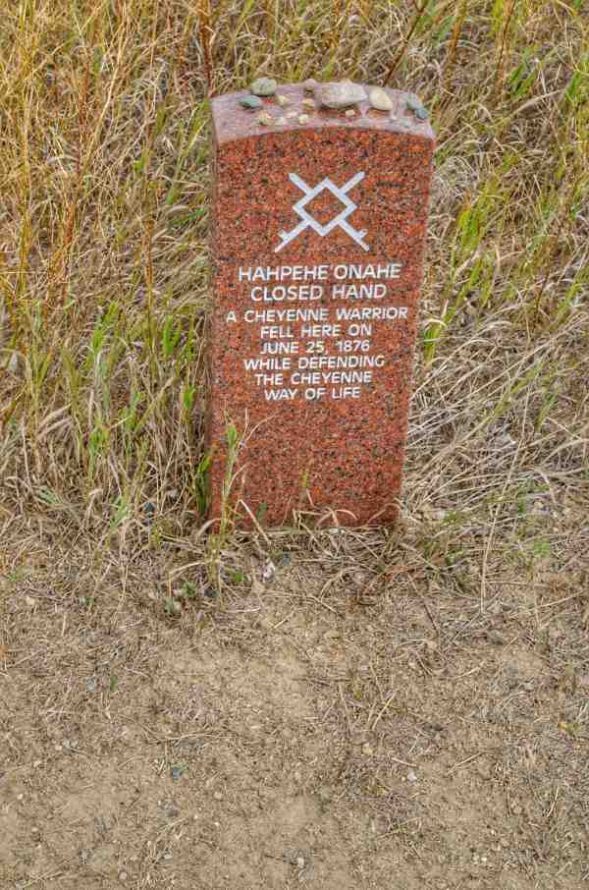 Today the site is managed by the National Park Service and holds both cultural and natural history exhibits in the small museum. The battlefield averages over 300,000 visitors per year from all over the world. When I was there, I saw buses and RV’s full of people along with a few veterans of the modern day 7th Cavalry. Yes, the 7th Cavalry still exists and has units assigned to the 1st Cavalry Division at Ft Hood Texas and the 3rd Infantry Division fort Stewart Georgia. 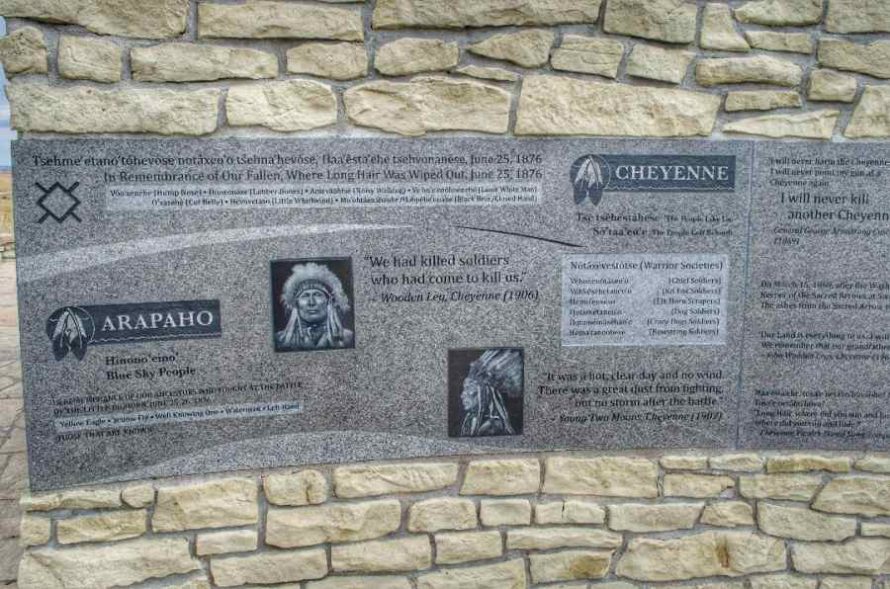 The site is officially known as The Little Bighorn Battlefield National Monument and markers show where the bodies of 7th Cavalry soldiers were found along with the location where some of the Sioux warriors fell. On a small hill, known as “Last Stand Hill” is a monument to the soldiers of the 7th Cavalry and a fenced in area with markers showing the location where Custer’s body was found. A total of five Custer family members died at the battle including Colonel George Armstrong Custer, his younger brother Capitan Tom Custer, his other brother Boston Custer who was assigned as a civilian forage master, his nephew Henry Armstrong Reed a volunteer soldier and his brother in law 1st Lieutenant James Calhoun. 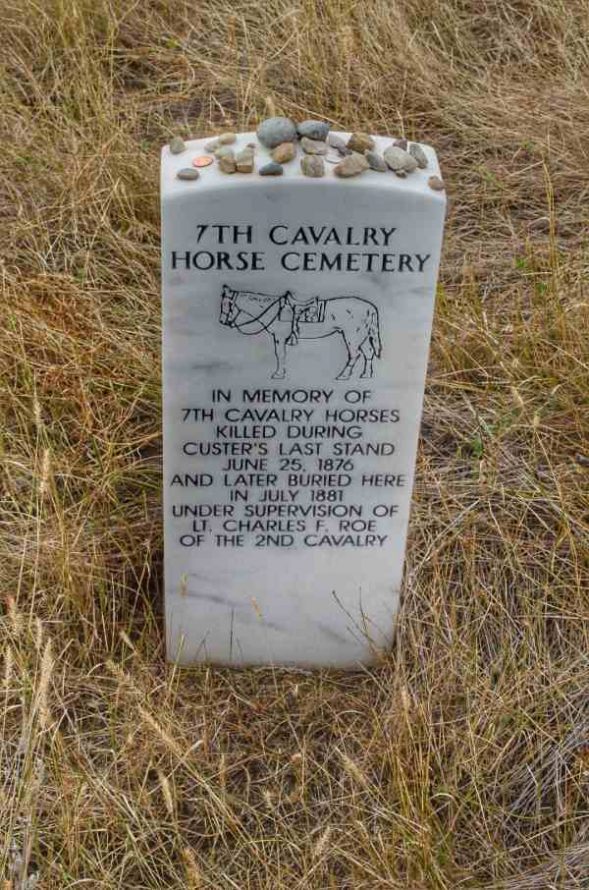 When the bodies were found the ground was not sufficient to bury the bodies very deep and during the following years the bodies would become exposed so in 1881 a monument was built on top of the hill and the soldiers bodies were re buried there. 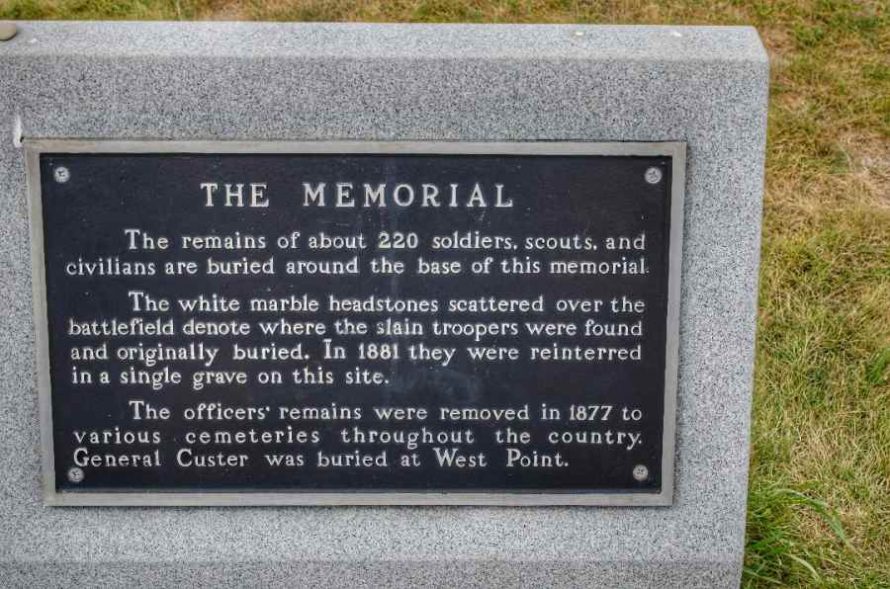 The body of Colonel Custer was removed from the site in 1877 and is buried at the US Military Academy at West Point New York. The rest of the Custer family members were reburied at various cemeteries by the family however the markers where they fell are still at the site. 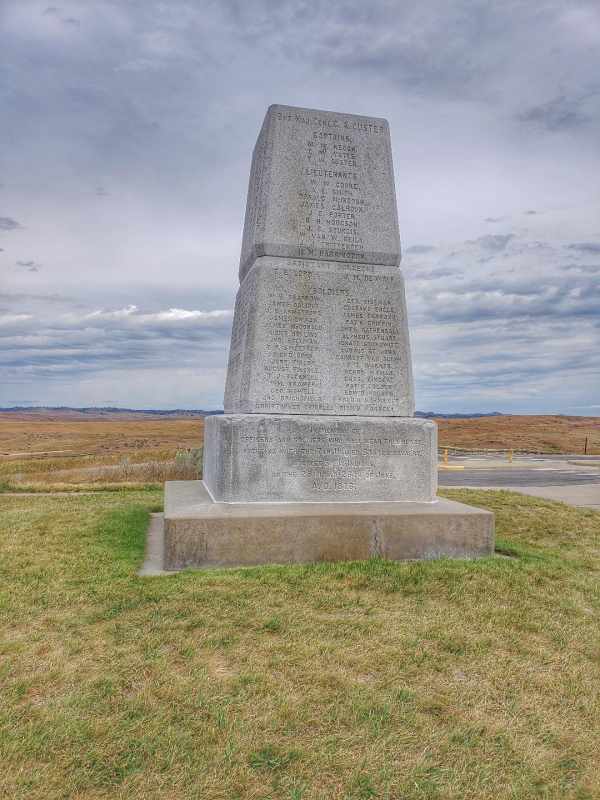 The park also holds the Custer National Cemetery was created after the battle in 1877 and in 1879 General William Tecumseh Sherman issued General Order No. 78 designating the site a National Cemetery. The cemetery holds soldiers from every major conflict from 1877 to those that died in Vietnam. In 1978 the cemetery was closed for new burials but a handful of plots exist for family members and other military members. 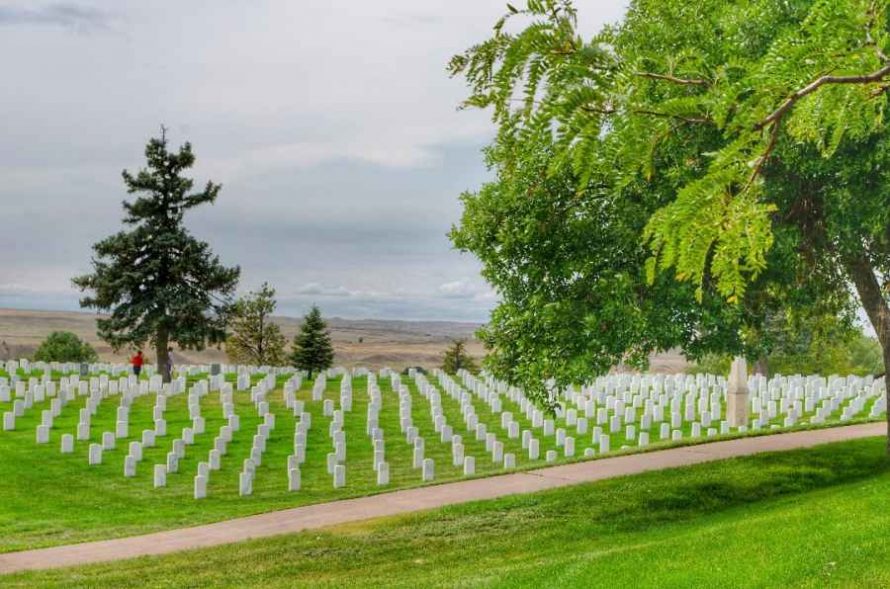 As in any battlefield or military cemetery you can learn a lot about history and those that served. No matter what your political affiliation is or your thoughts on the rights and wrongs of what occurred in history there should never be anything but admiration and respect for the soldier who served and followed orders, even when he knew it might be his last day. 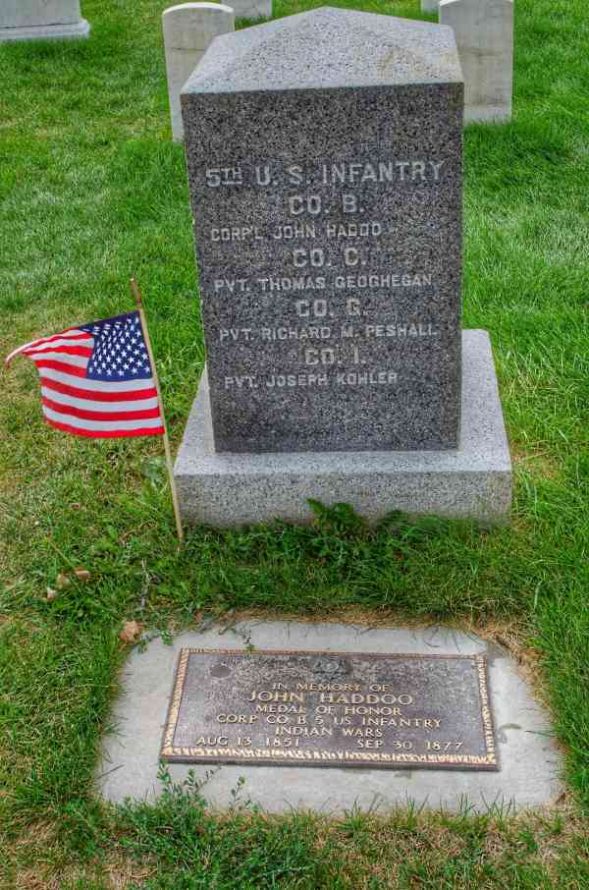 I have traveled throughout the world and always love visiting historic sites, many military related, and I always learn something new and come away with a better appreciation of what we have gone through in our past. 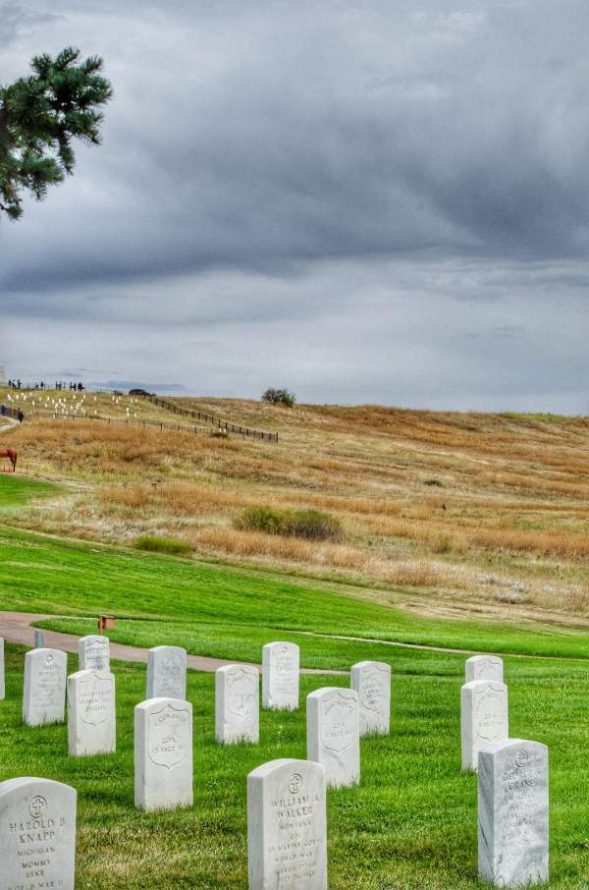 If you ever have a chance I would highly recommend a visit to the Little Bighorn Battlefield National Monument and while you are there take a look through the museum, listen to the presentation of the park rangers and have them tell you the history of the old west, 7th Cavalry and Indian Nations that make our past history unique. 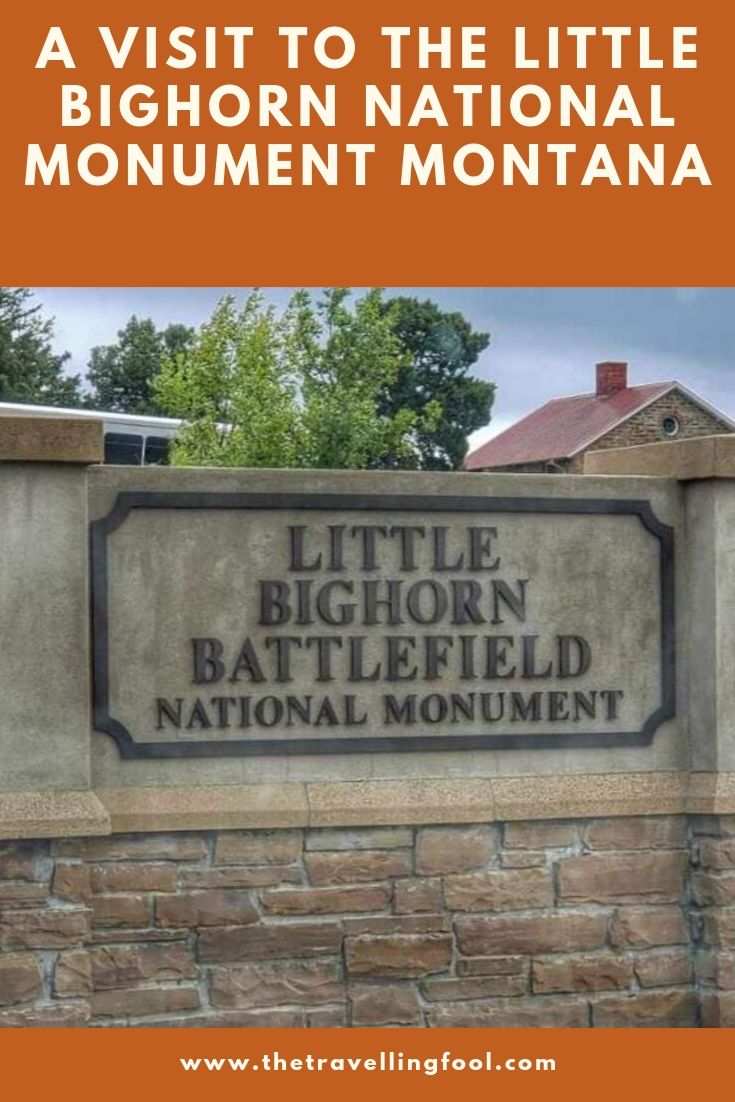